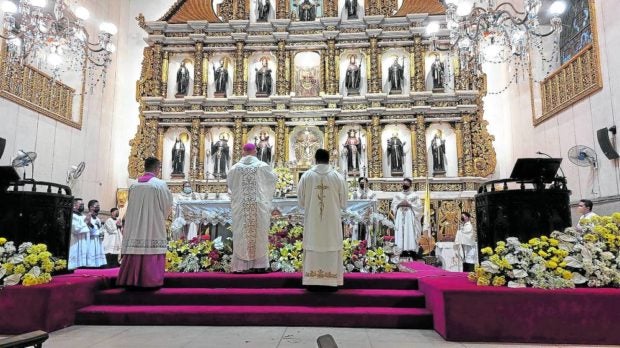 CEBU CITY, Cebu, Philippines — Cebuanos still found time on Sunday to celebrate the Fiesta Señor, or the Feast of the Sto. Niño, and the Sinulog Festival minus the usual revelry, as the coronavirus pandemic entered its second year and while still recovering from December’s onslaught of Typhoon Odette (international name: Rai).

Basilica Minore del Sto. Niño de Cebu in downtown Cebu City, which used to be packed with hundreds of thousands of pilgrims and devotees, was empty this time as the 547th Fiesta Señor Mass on Sunday was off-limits to the public, leaving Cebu Archbishop Jose Palma to officiate the religious rite in the presence of only priests as cocelebrants, as well as acolytes, lectors and choir members inside the cavernous centuries-old church.

Palma, in his homily, asked the people to keep their faith and trust in God amid the adversities.

“Even amid the devastation caused by Odette and the threat of the Omicron variant, we continue to gather with the Sto. Niño in our midst. Let us move forward knowing that the love of the Sto. Niño is forever,” he said.

But even while there were only few people inside the basilica, thousands did take time to celebrate the feast, which is held every third Sunday of January.

The Mass was streamed online on the social media pages of the basilica and media organizations in Cebu, drawing thousands of viewers. On the basilica’s YouTube channel and Facebook page alone, the Mass had over 140,000 real-time views, 22,000 reactions and comments, and about 3,000 shares. The hourly Masses between 5 a.m. to 9 a.m., also streamed live by the basilica, each drew at least 5,000 reactions and thousands of views.

The basilica’s open-air Pilgrim Center did allow entry to pilgrims but only to light candles and pay homage to the Sto. Niño before they were asked to leave.

On the eve of the fiesta on Saturday, a four-hour motorcade that began at 6 p.m. brought the image of the Sto. Niño to the mainland cities of Talisay and Mandaue, and Lapu-Lapu City and Cordova town on Mactan Island, before returning to Cebu City, passing by Cebu’s third and newest bridge.

Palma said he was moved by the thousands of people who waited by the roadside to take a glimpse of the Sto. Niño.

“People waited for hours just to see the Sto. Niño for a second or two. Since many of them cannot come here in the basilica, it is the Sto. Sto. Niño who went to them. Let us continue to trust and hope in God,” he said.

Before the pandemic hit the country in March 2020, at least 1.3 million devotees joined the 6-kilometer solemn procession that started and ended at the basilica on the eve of the fiesta.

For the second consecutive year, the world-renowned Sinulog Festival, the secular celebration of the feast, was also celebrated virtually and was a far cry from the grandiose event that in January 2020 brought at least 2 million people on the streets of Cebu City.

Sunday’s online celebration started at 8 a.m., featuring video and interviews on the history of the Sinulog, replays of dance performances and other highlights on the cultural celebration in honor of the Holy Child Jesus. In its final hour at about 4 p.m., a donation drive, or telethon, was held for the victims of Odette.

Mayor Michael Rama said the goal of the virtual Sinulog was to remind the people about the significance of the festivity, which is in honor of the Sto. Niño. Cebu Gov. Gwendolyn Garcia offered a prerecorded Sinulog dance in front of the capitol building accompanied by provincial officials, which was released online on Sunday.