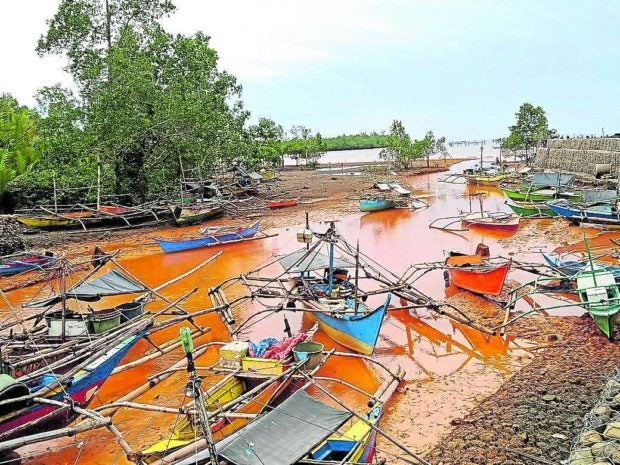 DAVAO CITY, Davao del Sur, Philippines — The Department of Environment and Natural Resources (DENR) in the Davao region has started an investigation into the heavy siltation of Maputi River in Banaybanay town, Davao Oriental province.

The DENR probe came after photos of the reddish or blood orange waters along the river circulated on social media on Friday.

The DENR noted that a high amount of silt settled into Maputi River on Jan. 14 after heavy rains occurred for more than 12 hours, with an accumulated rainfall intensity of 111 millimeters from noon of Jan. 13 to 5 a.m. of Jan 14.

“The large volume of water allegedly may have resulted in such siltation that caused discoloration of the said river,” it added.

On Sunday, however, local officials and residents of the rice-producing town raised suspicion that the river’s siltation was caused by a mining company operating in the area.

Mayor Adalia Caballero Lopez said she would be meeting with officials of Riverbend Consolidated Mining Corp., and the town’s farmers and fishers today, Monday, to sort out the concerns previously aired by fishers in the village of Maputi.

Joyce Corpuz-Ramirez and Marvin Gesher Jay Deniega, both teachers and longtime residents in the area, said in separate interviews that it was the first time that the water of their river turned red orange, as they refuted the claim by the DENR that it was only due to the siltation in the area.

They said they had previously experienced rainfall heavier than that what occurred last week and their river did not turn murky.

Deniega said he and a team of biologists and a geologist went upstream and noticed that the river that flowed to the boundary of the villages of Pintatagan, Puntalinao, Maputi, Causwagan and Mahayag was discolored. The team had collected water samples and sent it to a laboratory to find out if there were traces of toxic metals in it, he said.

On Jan. 6 last year, the Davao Oriental Provincial Board passed a resolution interposing no objection to the application by Riverbend for a mining operation permit to cover the villages of Puntalinao, Causwagan, Pintatagan, Maputi, Panikian and Mahayag.

Ramirez and Deniega said they never heard that a consultation was made regarding the entry of the mining firm in the area.

They said they were also concerned about reports that the mining firm started giving out relief goods in Maputi’s Sitio Mapagba on Sunday, as it might soften the residents’ objection to the mining operations in the area.

The Inquirer tried to reach the officials of the mining company but the calls were not answered.

Lopez said she was not aware of the company’s relief distribution although residents had told her that the company distributed 5 kilograms of rice, canned goods, noodles and sachets of instant coffee.

The mayor also clarified that Monday’s meeting with the mining firm was set long before the heavy rains and the discoloration of the river as it was called to sort out the concerns by fishers about the declining fish catch in the area.

She said she would now want to find out from the company if mining waste had overflowed during the heavy rains. INQ