Inside a migrant caravan leaving Honduras 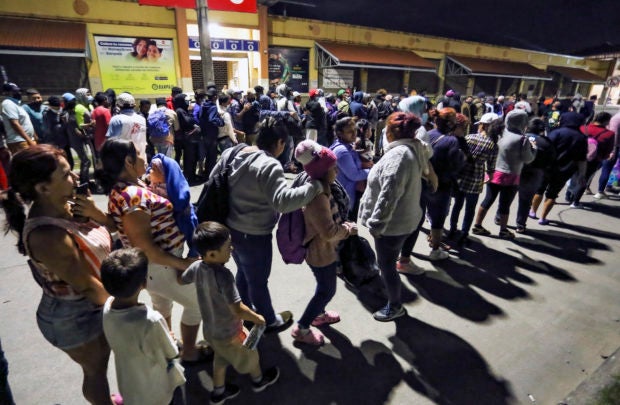 Migrants wanting to reach the US get organized to star a new march northbound, in San Pedro Sula, north of Tegucigalpa, on January 15, 2022. (Photo by Wendell ESCOTO / AFP)

Before the sun rose, many had already departed on foot, carrying the few belongings they had in backpacks or bags towards Corinto, a small Honduran border town on the other side of the mountains.

While their final destination is the United States, their main goal is “a better future for their family,” said a Nicaraguan who provided only his first name, Ovaldo.

He was accompanied by about 500 other migrants, originally from a variety of countries including Honduras, Haiti, Venezuela and Nicaragua.

Some had even crossed the ocean from Africa.

They will join a nearly endless flow of other migrants attempting to cross into Guatemala, then Mexico and ultimately the United States — which most will not manage to do.

At the Corinto border crossing, the group had arrived all together but broke into smaller groups to go through Guatemalan immigration.

Those who were missing identification or proof of a negative Covid-19 test were sent back into Honduras, according to an AFP photographer on scene.

For migrants who do make it past, they will still have more than 1,200 miles (2,000 kilometers) until the US border.

The last caravan to leave San Pedro Sula was in January 2021, and contained about 7,000 people.

It was broken up in Guatemala, when hundreds of soldiers attacked the migrants with sticks and tear gas, forcing them to return back to Honduras.

Migrants in Saturday’s caravan said they were risking the dangerous journey for multiple reasons: to escape violence from drug traffickers and gangs, but also to start anew after natural disasters such floods and droughts upended their lives.