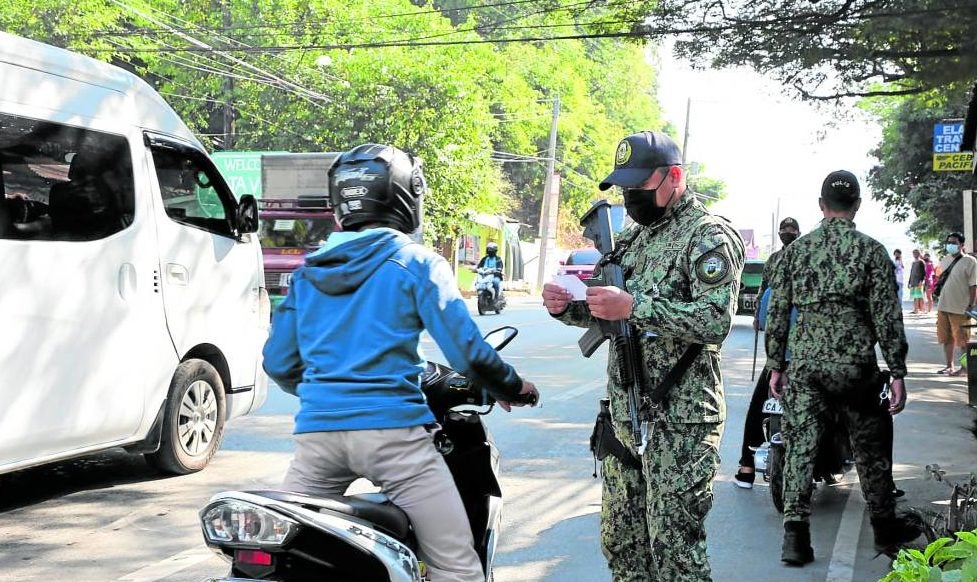 BORDER CHECK Policeman inspect the COVID-19 vaccination cards of residents and travelers who enter Olongapo City along the national highway in Barangay New Cabalan in this photo taken on Jan. 10. The city government has banned the entry of unvaccinated non-residents. PHOTO COURTESY OF OLONGAPO CITY INFORMATION CENTER

The peak number of COVID-19 cases in the National Capital Region (NCR) “may be in sight,” the independent pandemic monitor OCTA Research said on Friday, hours before the Department of Health (DOH) reported that daily infections topped 37,000.

“It appears that the daily new cases in the NCR may be peaking already,” said OCTA Reasearch fellow Guido David on Twitter. “Not yet clear if we have peaked already. But the peak may be in sight.”

Health Undersecretary Maria Rosario Vergeire also said during a press briefing with acting presidential spokesperson Karlo Nograles that based on the projections of experts, cases were expected to peak toward the end of January or in the second week of February.

David noted that the seven-day average of cases in NCR was 16,599 from Jan. 7 to Jan. 13, and the daily growth rate of the moving average was 5 percent on Thursday, down from 11 percent the previous day.

Despite the rising number of cases in Metro Manila, Nograles said the government decided to maintain alert level 3 in the national capital up to the end of the month because the hospital bed utilization rate was still below the figure that would trigger the shift to the next higher stage.

“As we always say, if it hits 71 percent, then that’s when it would be right to elevate Metro Manila to alert level 4,” said Nograles, who also cochairs the government’s pandemic task force.

He said the government was managing the situation to ensure that only those in critical or severe condition, along with people with comorbidities and the elderly, would be admitted in hospitals.

Mild and asymptomatic cases could isolate at home with assistance from telemedicine services, or be taken to temporary treatment and monitoring facilities, he said.

Presidential Adviser for Entrepreneurship Joey Concepcion said there was no need to declare alert level 4 because mobility had gone down even under alert level 3, likening the situation to a “voluntary lockdown.”

“The past experience with alert level 3, pre-Omicron, was effective because that led to fewer new cases and lower occupancy rates of hospital beds at COVID-19 intensive care units (ICUs),” Uy said.

However, the average daily attack rate (Adar) of 117.24 in NCR is still “severe” and much higher than the “acceptable” rate of under 10, he said.

Adar refers to the average number of new cases per 100,000 within a given period.

David cautioned that “we are not out of the woods yet.”

“[D]ata in the next few days will clarify the trends,” he said.

Parts of the country are in the early stages of a surge. In many cities, however, the surge had “matured” or is accelerating, David said.

On Thursday, the cities of Angeles, Baguio, Naga and Santiago had a “very high” Adar. It was “high” in Cebu, Dagupan, Iloilo, Lapu-Lapu, Lucena, Olongapo and Tacloban, he said.Vergeire pointed out that during the surge caused by the Delta variant, cases in other regions rose about two to three weeks after the surge in NCR.

Using the projections from experts, the government has instructed hospitals in all regions to prepare ICU beds for severe cases, she said.

The DOH on Friday reported a 47.3 positivity rate based on 81,787 people who were tested for COVID-19 on Wednesday. This is way above the World Health Organization’s benchmark of below 5 percent, sustained for two weeks, to indicate that coronavirus transmission is under control.

The 81 fatalities raised the death toll to 52,815, the DOH said. It said 21 deaths occurred this month, while the rest happened between November 2020 and December 2021 but were reported only on Friday due to late encoding in the COVIDKaya case collection system.

Eight laboratories did not submit data to the COVID-19 Document Repository System, according to the DOH. —WITH A REPORT FROM JULIE M. AURELIO