‘No vax, no ride’ policy meant to protect, not discriminate, says DOTr 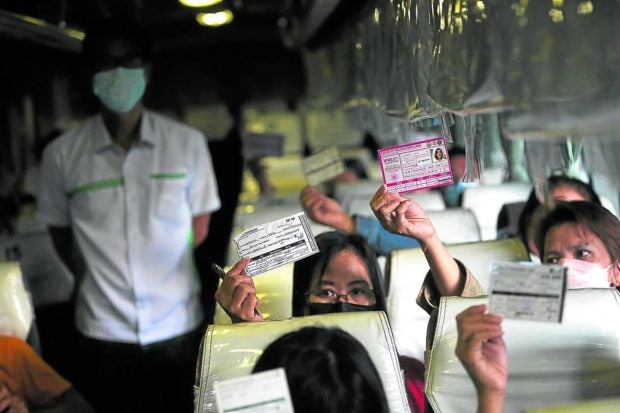 DON’T LEAVE HOME WITHOUT IT Passengers bound for Central Luzon on Wednesday are required to present proof of their COVID-19 vaccination before they are allowed to board their bus at Baliwag Transit Terminal on Edsa in Cubao, Quezon City. —NIÑO JESUS ORBETA

MANILA, Philippines — The Department of Transportation (DOTr) on Thursday clarified that its newly implemented “no vaccine, no ride” policy is meant to protect the general public regardless of vaccination status, and not to discriminate the unvaccinated.

“On those saying that the ‘no vaccination, no ride/entry’ policy in public transport is anti-poor, draconian or punitive, we believe that it is more anti-poor and anti-life if we will not impose interventions that will prevent loss of life due to non-vaccinations,” said the DOTr in a statement.

“We do not discriminate against the unvaccinated, but we are protecting them,” it added.

The DOTr reminded that the policy only takes effect while Alert Level 3 is implemented to stem the surging cases of COVID-19, particularly with the spread of the highly infectious Omicron variant.

Citing the World Health Organization (WHO), the DOTr reiterated that “while Omicron causes less severe disease than Delta, it remains a dangerous virus, particularly for those who are unvaccinated.

The DOTr also said that the policy is to keep the country from facing another transportation shutdown just like what happened during the Delta outbreak in 2021 in the MRT-3, LRT lines, and PNR,

The DOTr also said that the move is to avoid businesses from shutting down.

“If we do not act now, all industries and business sectors will be severely affected. Either the businesses will minimize workers, cut down on some parts of their business, retrench employees, or shut down to cut down on losses or pay off debts,” said DOTr.

“And this affects not only the business owners but people who will lose their job and all those who depend on them, it added,” it added.

It then assured the public that implementation of the said policy will be “tolerant and firm.”

This resolution was approved and signed by all Metro Manila mayors and the Metro Manila Development Authority (MMDA), and is strongly supported by the IATF.

“Our Department Order was issued in support of that Resolution… Further, all LGU Ordinances in Metro Manila prohibit the unvaccinated from using public transportation. We are supporting those local legal directives,” DOTr said.

The transportation regulator then clarified that unvaccinated individuals can still travel by using other means aside from public transport as there is no directive in prohibiting travel in general for the unvaccinated.

“We would also like to inform the public that it is DOTr’s position that the ‘no vaccination, no ride/entry’ policy does not violate RA 11525, which states that vaccine cards shall not be considered as additional mandatory requirement for educational, employment and other similar government transaction purposes,” the DOTr said.

“Access to public transportation is not among those enumerated in the prohibition. The Administrative Code prevails, which mandates DOTr to provide safe transportation services to the general public,” it added.

According to DOTr, the policy is also in line with President Rodrigo Roa Duterte’s order to restrict the movement of people who are unvaccinated against COVID-19 in Metro Manila.

Quoting the WHO for the second time, the DOTr said “you can’t put out half a fire. No one is safe, until we are all safe.”

The enforcement of the policy was announced on Wednesday, covering all domestic travel to, from, and within Metro Manila via public transportation by land, rail, sea, and air.