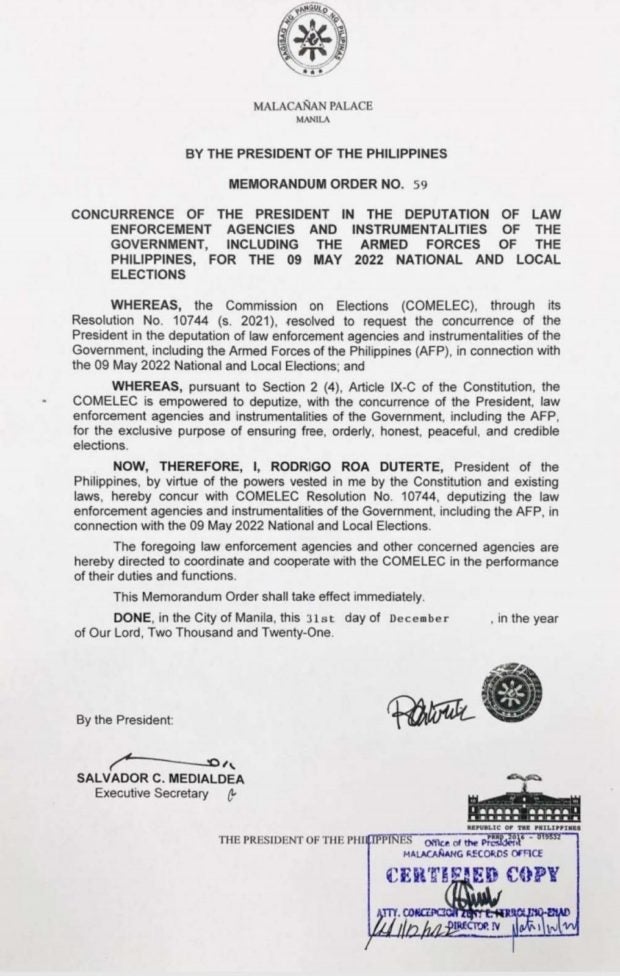 MANILA, Philippines — President Rodrigo Duterte has deputized the Armed Forces of the Philippines (AFP) and other law enforcement agencies for the May 2022 elections.

Duterte signed Memorandum Order No. 59—a copy of which was released to reporters on Wednesday—concurring with the Commission on Elections’ (Comelec) Resolution No. 10744.

“Now, therefore, I, Rodrigo Roa Duterte, President of the Philippines, by virtue of the powers vested in me by the Constitution and existing laws, hereby concur with COMELEC Resolution No. 10744, deputizing the law enforcement agencies and instrumentalities of the Government, including the AFP, in connection with the 09 May 2022 National and Local Elections,” the memorandum read.

“The foregoing law enforcement agencies and other concerned agencies are hereby directed to coordinate and cooperate with the COMELEC in the performance of their duties and functions,” it further stated.

Under the Constitution, Comelec is “empowered to deputize,” with the concurrence of the President, government’s law enforcement agencies, and instrumentalities, including the AFP, to ensure “free, orderly, honest, peaceful, and credible elections.”

Comelec: 10-15 voters allowed in polling place at a time; PNP or AFP on crowd control