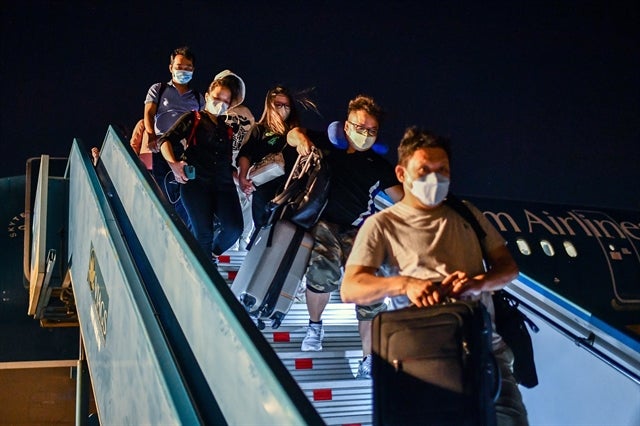 HANOI — Seven countries and territories, including the United States, Japan, Singapore, Cambodia, South Korea and China’s Taiwan, have agreed to resume air routes to Vietnam, according to the Civil Aviation Authority of Vietnam (CAAV).

Most have basically agreed with Vietnam’s proposal on the frequency of four regular international passenger flights per week per direction.

CAAV said it was negotiating with the aviation authorities of South Korea to increase flights.

A representative of Vietnam Airlines said that the airline was trying to resume regular international flights.

Tickets for these flights were available to all passengers who meet the requirements of immigration and medical regulations of the Vietnamese Government.

Regular flights have been safely operated and received a positive response from passengers, especially overseas Vietnamese returning home for Tết.

The airline expects to reopen flights to Australia soon as it would serve travel demand of both international visitors and those who returned home to celebrate Tết.

CEO of Vietjet Air Đinh Việt Phương said that Vietjet Air had resumed regular flights to Japan with a frequency of one flight per week and would increase the number of flights in the near future.

Deputy Minister of Transport Lê Anh Tuấn said the ministry had received much feedback from domestic and foreign airlines, which proposed removing the regulation on rapid testing for COVID-19 before and after boarding.

According to airlines, some foreign airports did not provide rapid testing services before the flight and the costs of rapid testing at some airports was very costly. In Japan, the test cost up to US$270 per passenger.

A shortage of specific instructions on rapid COVID-19 testing such as regulations on time for testing before boarding, authorities to organize testing and approve testing results or forms of payment have led to difficulties for airlines.

The compulsory rapid testing for passengers after landing at airports during the peak time of regular international flights could lead to congestion at airports and increase the infection risk, he said.

The ministry has asked the Government to approve the regulations on pre-flight RT-PCR testing for SARS-CoV-2 for passengers according to international practices instead of rapid testing before boarding or after landing.

In case the regulation on rapid testing is still maintained, the ministry has suggested that rapid testing be implemented only once after landing. It has also said that the Ministry of Health could be assigned to implement the procedures of rapid testing as well as payment for passengers on entry on international flights.

The ministry has requested the Government to assign the Ministry of Public Security to issue the guideline on immigration procedures for foreigners, which considers cases of those whose relatives are Vietnamese to enter the country for Tết.