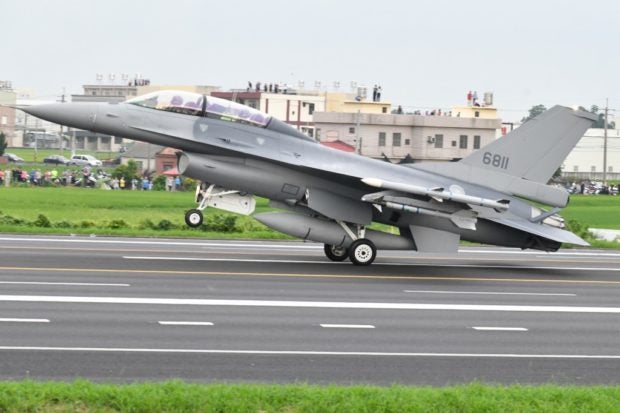 An US-made F-16V fighter jet lands on the freeway in Changhua county, central Taiwan, as local air fans take photos during the 35th Han Kuang drill on May 28, 2019. (Photo by Sam YEH / AFP)

Taipei, Taiwan — Taiwanese rescuers on Wednesday located the wreckage of an F-16V jet that crashed into the sea a day before, less than two months after the island launched the first squadron of its most advanced fighters.

The jet disappeared from radar screens around half an hour after taking off for a routine training mission from its base in southwestern Taiwan on Tuesday.

The air force said the jet plunged into the sea with no sign of the 28-year-old pilot ejecting in time.

The national rescue center said wreckage of fuselage had been found but there were no signs of the pilot following an all-night search involving multiple helicopters, coastguard vessels, and over 60 officials.

The incident has dealt a blow to the new squadron of US-made F-16Vs that was commissioned in November as Taiwan upgraded its aging fleet amid rising tensions with China.

The airforce has temporarily grounded its entire F16 fleet.

Beijing claims self-ruled Taiwan as part of its territory and has vowed to take it one day, by force if necessary.

Under President Xi Jinping, China has ramped up economic, diplomatic, and military pressure on Taiwan.

Taiwan’s air force has suffered a string of fatal accidents in recent years as it is kept under constant pressure by China, which has ramped up incursions into its air defense zone since 2020.

Last year, Taiwan recorded 969 incursions by Chinese warplanes into its air defense zone, according to a database compiled by AFP, more than double the roughly 380 carried out in 2020.

Last March, Taiwan grounded all military aircraft after a pilot was killed and another went missing when their fighters collided mid-air in the third fatal crash in less than six months.