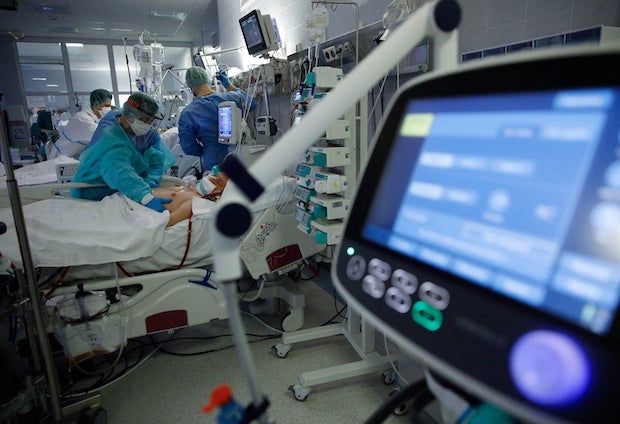 Medical staff members treat patients inside the coronavirus disease (COVID-19) ward at the Central Clinical Hospital of the Ministry of Interior and Administration in Warsaw, Poland, Jan. 11, 2022. (REUTERS/Kacper Pempel)

WARSAW — Poland’s death toll from coronavirus-related conditions surpassed 100,000 on Tuesday, as vaccine hesitancy and a reluctance to abide by COVID-19 restrictions fuelled a surge in infections, officials and doctors said.

The number of deaths per one million inhabitants was last week among the highest in the world, according to the Our World in Data project at the University of Oxford, at more than 57 compared to around 35 in the United States and 37 in Russia.

“Today we can say it is another sad day, but especially so because we have passed the level of 100,000 COVID deaths,” Health Minister Adam Niedzielski told private broadcaster TVN 24.

With 55.8% of the population fully vaccinated compared to 68.7% for the European Union as a whole, the country has one of the lowest rates of double-jabbed citizens in the bloc.

Vaccine hesitancy has been particularly pronounced in central and eastern Europe, with some experts attributing it to decades of Communist rule that eroded public trust in state institutions and left healthcare systems underdeveloped.

Poland’s ruling Law and Justice party, meanwhile, has been less willing than some other European countries to introduce strict rules to contain the spread of the virus.

“Poland is the country with relatively the lowest willingness to get vaccinated in Europe, and this was evident from flu vaccinations,” Niedzielski said.

Konstanty Szuldrzynski, a doctor and government adviser, told Reuters that low vaccination rates were only a part of the problem, with poor healthcare resources further exacerbating the situation.

Existing restrictions were not being implemented strictly enough, he added.

“We don’t use COVID certificates, and the restrictions that we do have are executed poorly. People do not cover their mouth and nose, gather in big crowds in public spaces and closed rooms,” he said.

The country has been grappling with a consistently high number of daily COVID-19 cases. Although it has not reported a rise in cases caused by the Omicron variant of the virus, it imposed new restrictions in December.

As of Monday, the health ministry estimates that the Omicron variant accounted for between 7% and 8% of new daily cases.

Poland reported around 11,406 new cases of COVID-19 on Tuesday and 493 deaths related to the disease. It reported 794 COVID-related deaths in one day in late December, while the highest daily toll during the pandemic is 954, in April last year.