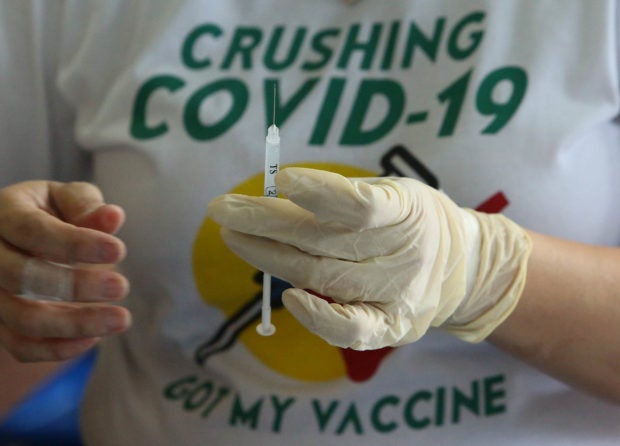 MANILA, Philippines — The government is creating a public-private partnership program to allow pharmacies and drug stores to administer vaccines, the medical adviser of the National Task Force Against COVID-19 said on Monday.

“This is the plan of the task force to increase the number of vaccination sites and to quickly vaccinate those who need to be vaccinated,” Dr. Teodoro Herbosa, former health undersecretary, said at the Laging Handa public briefing aired on state television.

Herbosa said the conduct of vaccinations in pharmacies and drug stores was conceived as a way for the private sector to participate in the national vaccination program.

COVID-19 vaccines in the country remained covered by emergency use authorization and may only be procured generally by governments. Herbosa said tripartite agreements that allowed private sector entities to access vaccines encountered “many issues” in the implementation and were difficult to monitor.

The need for more vaccination centers must also be addressed because the surge of COVID-19 cases was affecting the pace of the government’s vaccination drive, he said.

Herbosa said the government’s goal of 1 million to 1.5 million daily vaccine recipients beginning this year was not being attained because health-care workers in vaccination centers were being recalled to the hospitals.

There were also vaccinators who got infected and had to be quarantined for several days, which contributed to the slower vaccination rate.

Herbosa said he met with several officials of local governments who were planning to deploy “vaccination buses” to communities after their vaccination sites closed due to the lack of personnel.

The government missed its target of 54 million fully vaccinated Filipinos for 2021. Only 49.76 million have received their primary shots by the end of last year.

Meanwhile, Cavite Rep. Elpidio Barzaga Jr. on Monday said the government should roll out a second round of inoculation to protect the public from the new coronavirus and its highly contagious Omicron variant.

“The government’s pandemic response task force should consider giving additional two doses. Some countries, notably Israel, are already administering a fourth dose on their population to increase their level of protection,” he said in a statement.

If the government’s pandemic response task force decides to roll out a second round of vaccination, he said the inoculation program must start with health workers and front-liners, seniors citizens and those persons with comorbidities.

These priority groups, according to him, received either the China-made Sinovac or the United Kingdom’s AstraZeneca, the first two vaccines available in the country during the early stage of the pandemic.

“That was in April and May last year, or eight months to nine months ago,” he said.