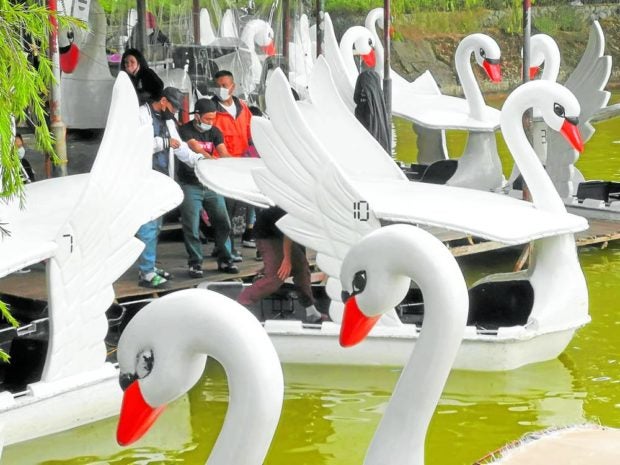 HAVEN FOR TRAVELERS Visitors and residents in Baguio City crowd Burnham Park, one of the popular tourist sites in the summer capital, in this photo taken on Jan. 6, or before the city was placed under the more stringent alert level 3 amid the rising COVID-19 infections. —EV ESPIRITU

BAGUIO CITY, Benguet, Philippines — Campaign rules next month will depend on the alert level status of each locality, prompting the Commission on Elections (Comelec) in the city to start collaborating with the local COVID-19 interagency task force (IATF) ahead of the 2022 national and local elections on May 9.

Baguio, which has a voting population of 168,219, was placed under alert level 3, the third most stringent in the country’s five-tier alert level system, until Jan. 15.

Under its current alert level, a candidate campaigning in this city could only be accompanied by three persons during neighborhood sorties, said lawyer John Martin, Baguio election supervisor, at a press briefing on Monday.

A level 3 category also limits “miting de avance” participation to 50 percent, and requires organizers of motorcades to reduce their numbers by half.

“Election offenses [during the pandemic] are very serious and some violations could get candidates imprisoned, perhaps for as long as six years,” Martin said.

While the campaign period officially started on Jan. 9, candidates for congressional, provincial, city and municipal seats can only begin going on sorties from March 25 until May 7. The campaign period for those running for president, vice president and senators is from Feb. 8 to May 7. A gun ban is in place during the campaign period (Jan. 9 to June 8), during which time even policemen and soldiers could not carry firearms in public unless authorized to do so.

Martin said the National Comelec Campaign Committee (NCCC) and its local counterparts would be activated next month to oversee all campaigns using counterpart categories of the IATF alert level system.

“We do not want the campaigns to be the reason for a [COVID-19] outbreak,” he said.

An outbreak would have serious implications on the outcome of the country’s first pandemic-era elections and may have national security implications, Martin explained.

“If a candidate going house to house infects the household with COVID-19, the family can’t leave. And if they can’t leave their homes, they can’t vote,” he said.

Martin said poll officials would be “most wary” if a town or city falls under alert levels 4 and 5 because the NCCC would not permit in-person campaigning in these areas.

As of Monday, Baguio has 927 active COVID-19 cases following a sustained rise during the first eight days of January. The city had only six active cases on Christmas Day.

Martin said he began coordinating with the city IATF, as well as with the Baguio City Police Office, for planning for the election-related activities.

“We have to be on the same page as the IATF, which would evaluate the alert level status of a community during the elections,” he said.