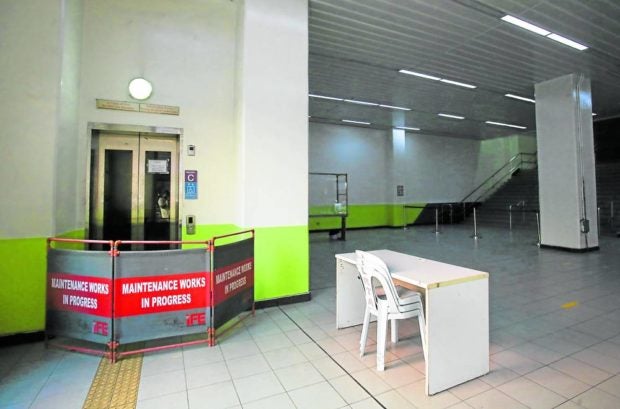 WAY UP The elevator servicing passengers of the Light Rail Transit at Recto Station in Manila is out of service and awaiting repairs, prompting passengers, including the elderly and those with disability, to use the stairs. —LYN RILLON

MANILA, Philippines — The Light Rail Transit Authority (LRTA) on Monday apologized for the defective elevators and escalators on the LRT Line 2, following a viral photo of a person with disability (PWD) forced to climb several flights of stairs at Recto Station in Manila.

In the viral photograph, the PWD had to climb the stairs by himself while security personnel and train marshalls carried his wheelchair, because the escalators were not functioning.

The same conveyance systems were earlier revealed to have been procured under an anomalous P170.3-million contract, and for which five agency officials and two contractors have been charged with graft in the Office of the Ombudsman.

In a statement, LRTA spokesperson Hernan Cabrera said the agency would “do its best to remedy the situation and restore the nonoperational station escalators and elevators for the convenience of LRT 2 commuters, especially amid the pandemic.”

Among others, the LRTA is eyeing an emergency procurement for the parts needed to repair the conveyance systems, as well as the tasking of the existing LRT 2 maintenance provider to undertake the repairs.

LRT 2 runs from Santolan in Marikina City to Recto in Manila.

The Commission on Human Rights (CHR) reminded the government to uphold PWD rights to accessible transportation.

This includes ensuring that public transportation has “functioning facilities that cater to the unique needs of PWDs,” it said.

“These are crucial in ensuring equal opportunity and access to basic services for this vulnerable sector,” the CHR said in its statement.

The defective escalators were part of the P170.3 million worth of equipment purchased for the LRT 2, and which were later discovered to have been anomalous.

In a fact-finding mission initiated by the late LRTA Administrator Reynaldo Berroya two years ago, the agency discovered that the 13 escalators installed at Recto Station were operating at only 6,000 capacity, below the required carrying capacity of 9,000 per hour.

Moreover, only one of those 13 escalators remained operational, with the rest having broken down even before the expiration of their warranty period.

Other anomalous purchases include a crate containing rerailing equipment with a sticker printout saying it was shipped by Chinese company CRRC Corp., as ordered by Kempal, the supplier in the contracts.

However, the crate was discovered to be containing equipment from Bemco, an Indian company.

Also charged were Kempal Construction and Supply Corp. and the joint venture of Ma-an Construction Inc. and IFE Elevators Inc., the winning bidders for the contracts.