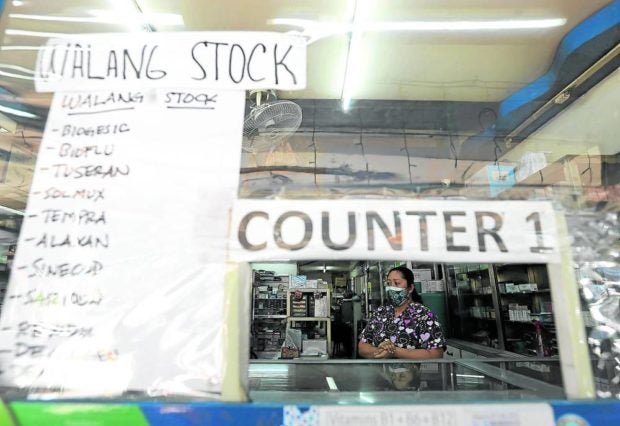 A pharmacy along Taft Avenue in Manila has put up a sign notifying people of some medicine brands that have been sold out since Monday this week, due to a high demand in paracetamol and cold medications as the NCR reverts back to Alert level 3 due to a spike in Covid19 cases. INQUIRER/ MARIANNE BERMUDEZ

Prosecution awaits individuals found to be hoarding and profiteering off medicine in high demand amid possible “scarcity” at several drugstores in Quezon City, according to Mayor Joy Belmonte.

A group of pharmaceutical and health-care companies disclosed on Tuesday that certain brands of paracetamol had run out of stock in certain drugstores.

Trade Secretary Ramon Lopez said that while two popular brands made by local pharmaceutical company Unilab—Biogesic and Decolgen—had temporarily run out of stock in some areas due to delivery issues, new deliveries were expected to start coming this week.

“There are other brands of paracetamol in the market, so there is no shortage,” he added.

Even so, Belmonte on Thursday called on city residents to report individuals and business establishments caught hoarding the medicines, particularly those commonly used to treat flu.

“We will not hesitate to prosecute anybody found hoarding and profiteering [off] these medicines,” the mayor said in a statement. 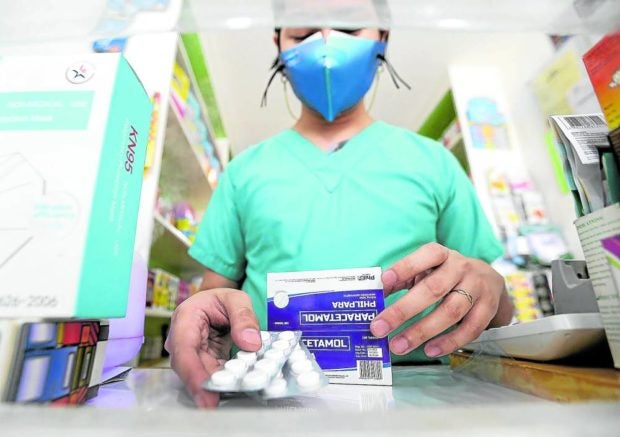 NO DELIVERIES Pharmacist Kace Cirelos shows what remains of a paracetamol brand at their shop in Manila. —RICHARD A. REYES

The city’s legal officer, Niño Casimiro, cited two laws that impose penalties and criminal liabilities when it comes to hoarding and profiteering off products.

These are Republic Act No. 7581, or the Price Act, and Republic Act No. 7394, or the Consumer Act of the Philippines, both of which prescribe criminal penalties “without prejudice to administrative sanctions as warranted under the circumstances.”

In particular, Casimiro raised Section 15 of the Price Act, which imposes criminal penalties on hoarding and profiteering.

Apart from national laws, hoarders and especially profiteers can also be penalized under the Quezon City Ordinance No. SP-2914 of 2020, as amended by Ordinance No. SP-2948, which limits the selling of basic necessities during calamities and emergency situations.

Belmonte also said that hoarders and profiteers are “preventing citizens who only want to purchase medicines for their families. We won’t let them get away with this.”

Meanwhile, the Quezon City health department said city residents may avail of the free medicines in its health centers, with the help of their new pharmacy management system.