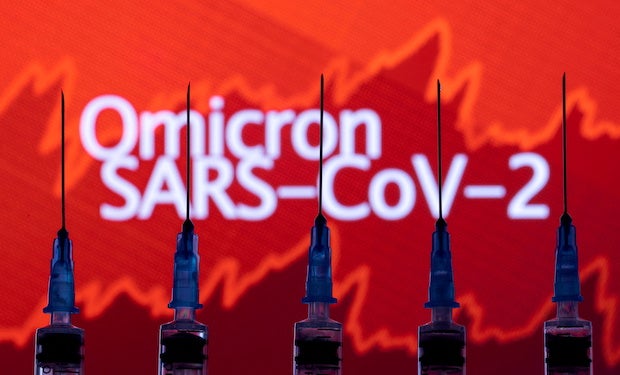 Syringes with needles are seen in front of a displayed stock graph and words “Omicron SARS-CoV-2” in this illustration taken, Nov. 27, 2021. (REUTERS/Dado Ruvic/Illustration)

Paris, France — A series of coronavirus outbreaks have cropped up on cruise ships in North and South America, Europe and Asia in recent days despite strict health measures, giving new headaches to the pandemic-hit sector.

Safety bubbles that include tests and vaccine requirements were set up to reassure travellers when cruise travel resumed last year following a long hiatus that was imposed as the world scrambled to contain the virus.

But cases have been piling up for days now in waters off Brazil, Italy, Spain, the Caribbean, the United States and India.

Cruise line companies say they have taken science-based measures to protect passengers and note that the rates of infection on ships is lower than those on land — but authorities have not taken any chances.

Last week, the Centers for Disease Control and Prevention (CDC) urged Americans to avoid cruise travel even if they are vaccinated after more than 5,000 cases were detected in US waters in the last two weeks of 2021.

The United States is the sector’s biggest market, accounting for nearly half of the 30.5 million passengers worldwide before the pandemic in 2019, according to data from Roland Berger consultancy.

The Cruise Lines International Association said the CDC decision was “particularly perplexing” as the number of cases represent a “very slim minority” of the total population on board ships.

“The majority of those cases are asymptomatic or mild in nature, posing little to no burden on medical resources onboard or onshore,” it added.

“No setting can be immune from this virus — however, it is also the case that (the cruise industry) provides one of the highest levels of demonstrated mitigation against the virus,” the association said, adding that its incidence rates are “significantly lower” than those on land.

In Brazil, cruises were suspended until January 21 while the association of liners and authorities work out “differences” over health protocols following infections on ships on New Year’s Eve.

Cruise trips had only resumed operating in November in Brazil.

In Europe, a cruise ship docked in the Italian port of Genoa this week to let 45 infected passengers disembark, while others who tested positive on board were isolated in cabins with balconies to be let off at later ports of call.

A trip on another ship from Spain to the Canary Islands was cut short, forcing some 3,000 passengers people to disembark in Lisbon following an outbreak.

In India, more than 2,000 people travelling from Mumbai to Goa were prevented from disembarking after 66 cases were detected on board.

And in Hong Kong, Royal Caribbean’s Spectrum of the Seas, a vessel carrying 3,700 people, was ordered back to port on Wednesday for testing after nine people were found to be close contacts in an Omicron variant outbreak.

“There’s a virus and what we have all learned over this entire pandemic is that nothing can be virus-proof 100 percent — nothing,” said a spokesperson at a global cruise line who requested anonymity.

Cruise ships have “the most stringent” health protocols in the travel and hospitality industry, the spokesperson said, noting that everyone on board is fully vaccinated and tested multiple times before and during trips.

“This does not happen anywhere else,” the source said.

But the industry, like the rest of the world, is now struggling to fend off Omicron, which is the most transmissible variant of COVID-19 to date, though it has low rates of deaths and hospitalizations.

“This sector has been severely penalized. It has lost tens of billions of dollars,” said Didier Arino, director of French consultancy Protourisme.

The cruise business made $49 billion in 2019, according to Roland Berger.

Arino said the industry will lose customers as media coverage focuses on infections on board ships.

Last month, Royal Caribbean — on the world’s biggest cruise companies — reported a decline in bookings and increase in cancellations for near-term trips, though to a “lesser degree” than experienced with the Delta variant.

“We are constantly learning and adjusting as Omicron appears to be ushering in a new phase in the fight against COVID-19,” Royal Caribbean chief executive Richard Fain said last month.

While this will have a short-term negative impact, he voiced optimism about the future, saying he expects “a strong transitional year in 2022 and a very strong 2023.”