MANILA, Philippines — Senate President Juan Ponce-Enrile is hoping and confident that Chief Justice Renato Corona will personally appear and testify in his own impeachment trial to explain the bank accounts that he allegedly owned. 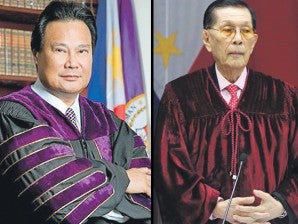 But Corona’s lawyers are divided over the issue of whether or not to allow their client to testify before the Senate, sitting as an impeachment court.

Ramon Esguerra, a member of Corona’s defense team, said they would meet on Friday to discuss the matter although some of them believed that the Chief Justice would be in the best position to explain and clear himself from all allegations being lodged against him.

“We have discussed this early on, last week yata. We will therefore take this into serious consideration when we meet on Friday,” Esguerra said over a phone interview.

“There are some kasi who believe from our end that indeed the Chief Justice should take the stand. There are those… who don’t want him to take the stand because of the possibilities, hindi naman yung baka mabastos lamang sya but more on magsanga-sanga ang mga questions, mga issues that can be brought out on account of his testimony,” he said.

“Kasi hindi naman matatapos kung ano yung sa sinabi lang nila so it’s really a delicate mater, a very serious decision that we have to make and I hope that we will be given wisdom by our good Lord to be able to make the right decision,” Esguerra added.

He said Corona , and not his lawyers, should explain the bank accounts that the prosecution had presented before the Senate supposedly in his name.

“Sapagkat siya [Corona] ang nakapangalan dun e. Sa kanya ba yun o hindi sa kanya? O kung bakit hindi naisama sa kanyang SALN [Because the bank accounts were in his name. Does he own them or or not? Why it was not included in his SALN]?” asked Enrile. SALN stands for statement of assets, liabilities and net worth.

Enrile said Corona’s personal appearance in his own impeachment trial would be good not only for him but also for the the impeachment process and the country.

But Esguerra said Corona was leaving it up to his defense team whether or not he should appear before the impeachment court.

“Tinanong nya kami, what’s the best? He cant decide this for himself. Although you know, some of us have told him that you’re in the best position to explain everything. He just just took that under advisement and a t the appropriate time we will discuss the matter,” he added.