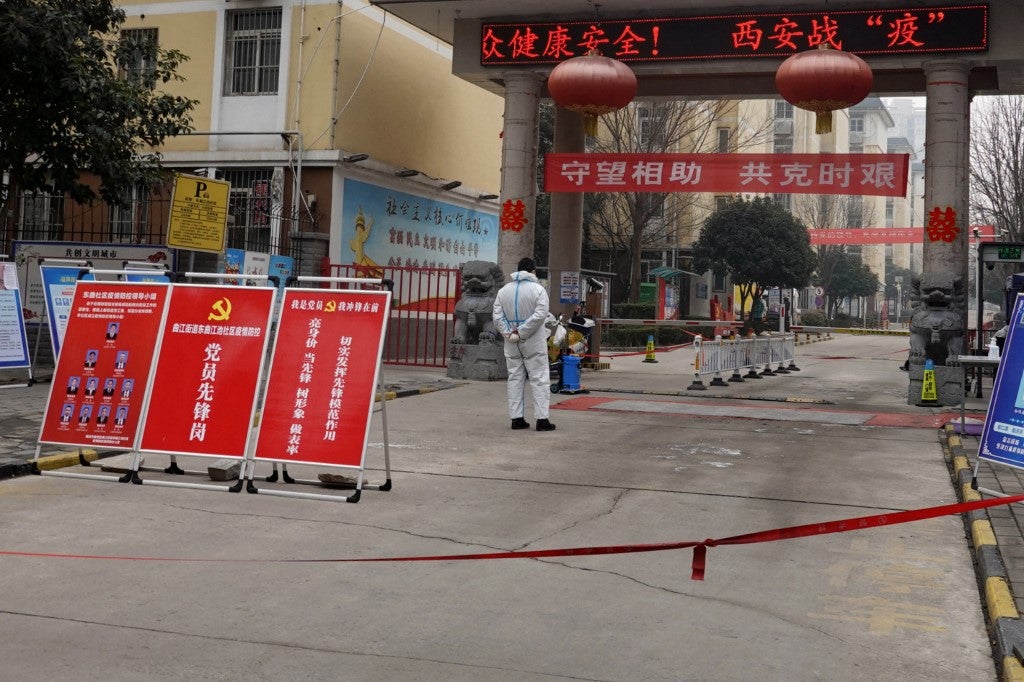 A man in a protective suit stands guard at an entrance of a residential compound in Xi’an in China’s northern Shaanxi province on January 5, 2022. (Photo by AFP)

Beijing, China — A top health official in China’s locked-down Xi’an apologized on Thursday over the miscarriage of an eight-month-pregnant woman, after footage went viral of a hospital refusing her entry without a COVID test.

The city of 13 million has been under strict home confinement for two weeks to stamp out an outbreak, in line with Beijing’s firm “zero COVID” strategy.

The distressing incident was detailed in a social media post by the woman’s niece on January 1, which included photos and video of the woman sitting on a plastic stool outside the hospital surrounded by a pool of blood.

The post was later removed but not before it got hundreds of millions of views and sparked widespread anger online about the hardships faced by Xi’an residents.

Liu said the hospital had been told to “compensate” the woman and apologized that “access to medical care was not smooth during the epidemic”.

The city said in an earlier statement Thursday that the incident at Xi’an Gaoxin Hospital had aroused “widespread concern and caused a bad social impact”, adding that the local health bureau was investigating.

The hospital’s general manager has been suspended over the incident, as have “responsible persons” at the outpatient department.

The statement got more than 700 million views Thursday — illustrating the huge interest the case has generated within China.

According to the January 1 post that went viral on the Twitter-like Weibo platform, staff refused to admit the heavily pregnant woman for two hours because she did not have a negative COVID test from within the previous 48 hours.

Her niece wrote that her negative test result had expired just a few hours earlier.

AFP could not verify the post, and calls to the hospital went unanswered.

The reports follow complaints from Xi’an residents over chaotic handling of the lockdown, including poor access to food and daily essentials.

On Wednesday, officials told reporters that Xi’an was opening “green channels” to provide urgent medical services to certain groups — such as pregnant women and patients with critical illnesses.

The pledge came as a second woman took to social media to say she had miscarried last week after being rejected by several hospitals.

The woman, who said she was in the first trimester of pregnancy, wrote that she was unable to reach anyone on the public service hotline but she thanked police for trying to help her contact hospitals.

“I don’t understand why couldn’t I get through at the public hotline, and why I got given the runaround everywhere. Maybe ordinary people’s lives are worthless,” she wrote in a post from Wednesday.

Another Xi’an resident said her father died Monday after several hospitals declined to treat his heart ailment “due to pandemic-related rules”.

In a social media post from Thursday that has been viewed more than 500 million times, she recounted driving for over eight hours searching for a hospital while her father complained of severe chest pains.

After he was finally admitted, “the doctor said that the delay was too long”, she wrote.

It was unclear why hospitals had declined to admit the 61-year-old.

Coronavirus case numbers in China remain very low by international standards. But in recent weeks, infections have reached a high not seen since March 2020.

There were 189 cases reported Thursday, including 63 in Xi’an.

Xuchang city in neighboring Henan province announced Thursday that it would test its more than 4 million residents after reporting 50 cases on Thursday, while the provincial capital Zhengzhou halted dozens of coach routes.