Omicron may be driving spike in COVID infections – DOH 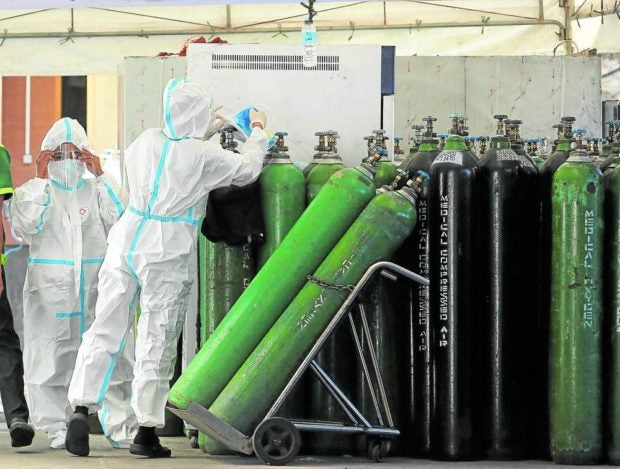 PREPARING FOR SURGE Medical workers at Justice Jose Abad Santos General Hospital in Manila check oxygen tanks as they brace for an increase in admission due to a spike in infections in the National Capital Region after the Christmas and New Year holidays. —MARIANNE BERMUDEZ

MANILA, Philippines — There’s a high possibility of local transmission of the Omicron variant of the novel coronavirus, following a sharp increase in cases, the Department of Health (DOH) said on Monday said.

For the second straight day, the DOH reported more than 4,000 new COVID-19 infections. Its case bulletin on Monday showed there were 4,084 new cases—lower than the 4,600 cases reported on Sunday.

“Based on our observation, our assumption is it’s now in the community because we have seen the sudden increase in the number of cases,” Health Undersecretary Maria Rosario Vergeire said in an online press briefing.

“In other countries, according to our experts, virus cases double every two days. We can see that trend here in the Philippines. That’s why our assumption is Omicron has already reached our communities,” she added.

“In other countries, according to our experts, virus cases double every two days. We can see that trend here in the Philippines. That’s why our assumption is Omicron has already reached our communities,” she added.

But Vergeire also emphasized that a definitive test using whole-genome sequencing was still needed to confirm local transmission of the variant.

“We all know what drove our cases to increase,” she said. “There are a mix of factors—our mobility increased and compliance to minimum health protocols decreased since the start of the holiday rush… There were so many people in the malls, there were gatherings and reunions, that’s why our cases rose.”

Dr. Edsel Salvana, a member of the DOH Technical Advisory Group, affirmed Vergeire’s remarks. “Based on breakthrough infections, especially among the vaccinated and even the boosted, although most [of them] were mild infections, … there is a possibility that there is already Omicron circulating, we just don’t know its proportion,” Salvana said.

The country now had 14 cases of the Omicron variant, three of which were local cases and 11 from abroad. Of the 11, nine were returning Filipinos and two were foreigners.

Vergeire said all were either asymptomatic or had experienced mild symptoms, adding that two cases remained active.

She said the department had once again classified the country as being “high risk” in terms of coronavirus transmission, with daily cases increasing by 570 percent.

She noted that, as of Sunday, Metro Manila registered a two-week growth rate of 813 percent and an average daily attack rate of 5.42 cases per 100,000 population.

But Vergeire said, “In the recent week, admissions nationwide increased by 9 percent… Over the course of one week, the [National Capital Region] also saw a 49 percent increase in admissions.”

The country’s total caseload since the pandemic started was now 2,855,819.

The positivity rate on Monday was 20.7 percent, about 4 times the World Health Organization’s benchmark of below 5 percent to indicate that coronavirus transmission is under control.

The chair of the Vaccine Expert Panel of the DOH allayed concerns about the effectiveness of the vaccines amid the possible spread of the Omicron variant in the country.

Getting vaccinated with a least one dose, she said, already provides up to 52 percent protection from COVID-19. Full vaccination increases protection to 72 percent and a booster shot further raises immunization to 90 percent, Gloriani said.