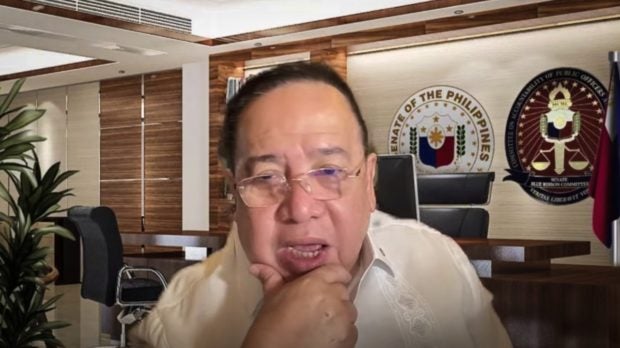 MANILA, Philippines — The Senate blue ribbon committee is set to circulate a draft committee report on the controversial Pharmally Pharmaceutical Corp. even as the panel’s chair, Sen. Richard Gordon, pressed his search for at least three more company executives.

“We cannot yet end [the probe] because of some loose ends. We still need to make people appear and face the Senate, such as those personalities who remain at large,” Gordon said.

Gordon is also searching for businessman Lin Weixiong, whom he claimed was Yang’s alleged “bagman,” who collected payments from the government for Pharmally.

“We have seen in photos that Lin and Yang were together in Pharmally, and were together with [President Duterte] in China, often with [Sen. Christopher Go]. We can see how the biggest people in our government are surrounded by evil,” he said in a radio interview.

Pharmally officer Krizle Mago also needs to explain why the tax identification number she provided in official documents cannot be found in the registry of the Bureau of Internal Revenue (BIR), Gordon said.

Private auditors and accountants who pored over Pharmally’s transaction records also “have more explaining to do,” he said.

According to Gordon, the Senate is “serious” in going after those responsible for the Pharmally fund controversy, and will closely keep an eye on the BIR as it pursues 94 “open [tax] cases” against Greentrends Trading and Tigerphil Marketing.

The two companies supposedly supplied Pharmally with face masks that were sold to the government, through the Procurement Service of the Department of Budget and Management.

Gordon urged senators to read the draft committee report in its entirety, as he predicted that some senators may not sign the document once they see that it implicates “some big people [in government].”

“We’re not in a hurry and I will not be rushed to come out with the committee report. I am not scared [to release it],” he said.

But while the Senate probe drags on, the three Pharmally executives who are under detention for contempt of the Senate—Twinkle Dargani, Mohit Dargani and Linconn Ong—will have to stay in detention, he said.