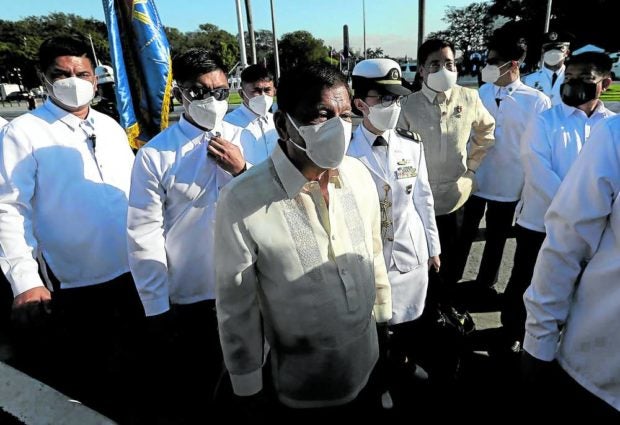 TRADITIONAL RITES President Duterte arrives for the traditional wreath-laying at the Rizal monument in Manila. —RICHARD A. REYES

MANILA, Philippines — Filipinos should appreciate the sacrifices of modern-day heroes at the frontlines fighting the COVID-19 pandemic, President Rodrigo Duterte said on Thursday as he led his last Rizal Day ceremony as chief executive.

“As we commemorate Rizal’s contribution to our freedom and self-determination, may we continue to honor him by exemplifying patriotism and idealism in all our endeavors as well as by fostering a greater sense of nationalism among the Filipino youth,” Mr. Duterte said in his message released by Malacañang.

According to the president, true heroes give their lives for love of country and people.

This, he said, was demonstrated during the COVID-19 pandemic, during which “people of unmatched boldness and compassion stood and fought against the odds brought by the disease in order to help save lives, even while risking their own.”

“Today, as we celebrate the life and works of Dr. Jose Rizal, let us also honor our modern-day heroes who are at the frontlines. Let us emulate his wisdom and courage in our own simple way as we pursue a better and brighter future for all,” he added.

“People of unmatched boldness and compassion stood and fought against the odds brought by the disease in order to help save lives, even while risking their own,” he said.

He described “true heroes” as those who give their lives for the love of the country and of the people.

This year’s commemoration of the 125th anniversary of the hero’s martyrdom has the theme, “Rizal: Para sa Agham, Katotohanan at Buhay” (For Science, Truth and Life).