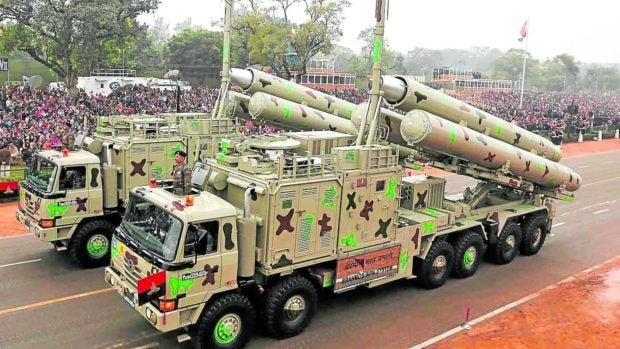 FOR PH SHORES The Philippine Navy hopes to beef up the country’s coastal defense with BrahMos cruise missiles, shown here mounted on a truck and paraded in New Delhi, India, in January 2015. —REUTERS

MANILA, Philippines — After more than a year’s delay, the Department of National Defense (DND) can finally proceed with its acquisition of cruise missiles from India, following the approval of funds worth P2.83 billion for release by the Department of Budget and Management (DBM).

The DBM on Dec. 27 issued two special allotment release orders (Saros) — one for P1.3 billion and the other for P1.53 billion, to cover initial funding requirements for the Philippine Navy’s shore-based antiship missile system acquisition project.

Defense Secretary Delfin Lorenzana earlier said the Navy was intent on acquiring the medium-range ramjet supersonic BrahMos cruise missile system from India, which he described as “one of the most sophisticated in the world.”

In November last year, Lorenzana disclosed that talks concerning the procurement had been stalled by the coronavirus pandemic. A deal was supposed to have been sealed in the first half of 2020 but, according to the DND chief, funds meant for the missiles were instead used for the government’s pandemic response.

The BrahMos (short for the Brahmaputra and the Moskva rivers) system features medium-range missiles that can be launched from submarines, ships, aircraft or land-based platforms.

The Navy is eyeing a land-based BrahMos missile system mainly for coastal defense, under the second phase (2018 to 2022) of the Revised Armed Forces of the Philippines Modernization Program (RAFPMP). The plan was to procure two missile batteries, each with three mobile autonomous launchers.

Lorenzana said the cruise missiles would only be for defensive measures and “will not be used as offensive weapons.

Since 2016, under the Duterte administration, the AFP has acquired some P135 billion worth of big-ticket items under the program, for which it had set aside P25 billion each year. But funds worth P17 billion for procurements programmed in 2019 and 2020, however, were diverted to the pandemic response.

In 2021, P27 billion was allocated for the program, which was jump-started after a two-year lull.

On Tuesday, the DND signed a deal for two corvettes from South Korea.

For next year, Lorenzana is looking to seal contracts for 32 S-70i Black Hawk helicopters from Poland, six offshore patrol vessels from Australia, and the BrahMos missile system from India.