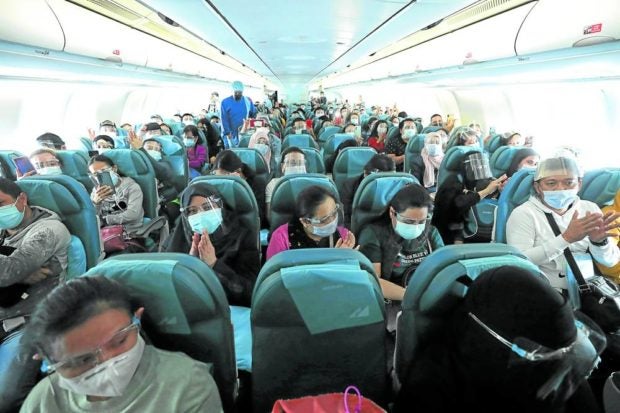 MANILA, Philippines — The millions of overseas Filipino workers (OFWs) who are helping to keep the economy afloat with their billions of dollars in remittances will have an entirely new government agency dedicated to protecting their rights and welfare after President Rodrigo Duterte on Thursday signed a law creating the Department of Migrant Workers (DMW).

“The establishment of the Department of Migrant Workers happens on the celebration of Rizal Day, when we honor, not only the exceptional love of country of Dr. Jose Rizal, but also the patriotism, excellence and courage of our modern-day heroes, including our OFWs,” the President said in his remarks at Malacañang during the signing of the law and also of the 2022 General Appropriations Act.

Foreign Undersecretary for Migrant Workers Affairs Sarah Lou Arriola said there would be a transition period before the agencies, which were involved in various ways to provide aid to OFWs, would be brought under the DMW.

“This is not only a campaign promise fulfilled [by Duterte], this is also a testament to the leadership of the Philippines when it comes to migration,” Arriola said.

ACT-CIS Rep. Jocelyn Tulfo, one of the primary authors of the measure, said the new agency would unify into one department all the services and programs designed for OFWs.

Taguig-Pateros Rep. Alan Peter Cayetano said the new department would allow the government to respond better to the needs of OFWs in times of crisis.

“We have always found it ironic that while our OFWs have kept our economy vibrant with their remittances over the past decades, they have been given a hard time when it comes to their transactions with the government through red tape and bureaucracy,” the former Speaker said.

The principal author of the law in the Senate, Sen. Joel Villanueva, said the new department will serve as the “home” of the OFWs.

He said they had been for many years crying for help to deal with illegal recruiters, fixers, abusive employers and problems of reintegration on their return home.

“Today, we make good of our promise for our OFWs to be treated better, with dignity befitting heroes who have kept the country’s economy afloat and their families who stay behind and bear the sacrifice of being apart with their parents and relatives,” he said.

Under Republic Act No. 11641, the Philippine Overseas Employment Administration (POEA) will serve as core agency of the new department. The existing POEA governing board will be called the Advisory Board on Labor Migration and Development and function as an advisory body to the DMW secretary.

The Owwa will become an attached agency of the DMW for policy and program coordination but will continue to function in accordance with its charter.

The law creates the Agarang Kalinga at Saklolo para sa mga OFWs na Nangangailangan (Aksyon) Fund for legal and other forms of assistance to OFWs. It will be separate from the fund managed by the DFA called the assistance-to-nationals (ATN) Fund and the Legal Assistance Fund for the benefit of other Filipinos overseas and for consular assistance services.

According to a briefing paper from the office of TUCP Party list Rep. Raymond Mendoza, one of the law’s principal authors, the new department will have four undersecretaries in charge of internal management and administration, foreign employment and welfare services, licensing and adjudication, and policy and international cooperation.

There will be two separate offices for land-based and sea-based OFWs, each headed by an assistant secretary.

A Migrant Workers Office will absorb all the powers, existing functions and personnel of the Polos, Oswa, and the powers and functions of existing ATN units with regard to OFWs in all Philippine embassies and consulates.

Senate Minority Leader Franklin Drilon said he had included sufficient safeguards in the law to protect the billions of pesos in a trust fund pooled out of membership contributions of OFWs being managed by the Owwa.

According to Drilon, the Owwa Fund, amounting to about P19 billion, would only be used for the welfare of member-OFWs and their families. The money will not be used to aid, supplement or augment any required expenditures by other government agencies, he said.

The law also assigns the SSS president as a member of the Owwa Board to ensure that the agency focuses not just on providing welfare but also on efficient fund management, and to protect and preserve the trust fund, Drilon said.

The DFA estimated that as of December 2019, there were over 10 million Filipinos abroad, 3 million of them OFWs.

It said that Asia and the Pacific region and the Middle East accounted for 87 percent of the total number of OFWs.

The Philippine Statistics Authority said that one out of five, or 22 percent, of 2.2 million Filipinos working abroad from April to September 2019 were in Saudi Arabia.

About 40 percent were involved in cleaning, maintenance, kitchen work, delivery, transportation and construction. Others were employed as service and sales workers, machine operators, technicians, professionals and trade workers.

Workers’ remittances amounted to $28.8 billion from January to October this year, according to preliminary data from the Bangko Sentral ng Pilipinas. The total was 5.4 percent higher than the $27.4 billion in the same period in 2020. As of November, 809,374 OFWs have returned home to the provinces since the start of the pandemic, according to the labor department.

—WITH REPORTS FROM NESTOR CORRALES, MELVIN GASCON AND INQUIRER RESEARCH