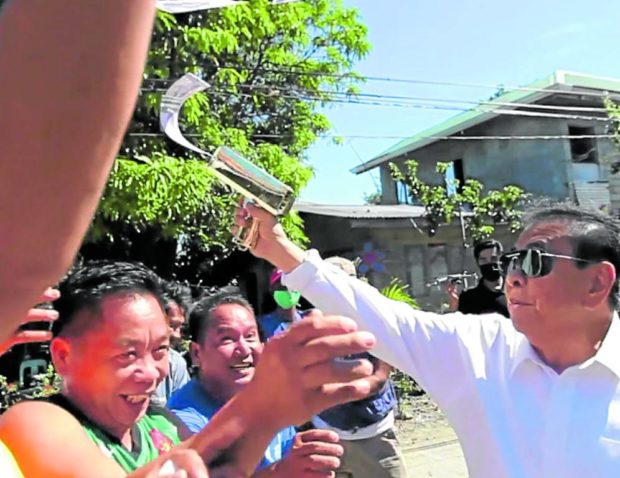 Wearing his signature shades but no face mask, Singson was shown in a video firing P100 and P500 bills from the gun while his shrieking constituents scrambled to grab the money.

The 43-second video posted on his official Facebook page has gone viral, generating at least 2.9 million views and 72,000 reactions.

In an interview on Thursday, the 80-year-old political kingpin of Ilocos Sur said his gesture was not a campaign gimmick because he was not seeking a local or national post in the May 2022 elections.

He said giving away cash in that manner was nothing new, having done so in the past and not only during the holidays.

“It was meant only to make people happy, especially since it’s Christmas. If people are happy, I am, too,” Singson said in Filipino.

Ilocos Sur residents said Singson had always been “generous” since he started in politics in 1972. “This is what giving looks like in his bailiwick. He would give money whenever he feels like it. Trip lang,” remarked a resident.

Jenny Macatiag, who has handled Singson’s media and public relations since 2003, said in an interview on Thursday that the former Ilocos Sur governor had “always been like that,” blasting wads of cash to supporters “just for fun.”

She declined to disclose the amount of money given away, saying only that “it was not much.”

Macatiag, who grew up in Sinait town in Ilocos Sur, recounted that people expected Singson to give away cash each time he attended public gatherings or fiesta celebrations. “Everybody would wait for him even late in the night. He enjoys giving away cash because it makes people happy,” she said, adding that residents would often tease Singson to “bring out his gun” whenever they saw him in public.

But a number of netizens said Singson’s way of doling cash was “demeaning,” “insulting,” and “exploitative.”

“We have lost our dignity as a people!! Very, very sad picture!” a netizen commented.

Others said Singson appeared unconcerned about his constituents’ well-being amid the COVID-19 pandemic.

“There’s not even a bit of care! And nobody is doing anything about it! So irresponsible or just plainly careless and brainless!” another netizen said.

In response, Macatiag said Singson had no intention to degrade the dignity of the public.

Shortly before the 2019 elections when he ran for mayor of Narvacan, Singson was caught on camera using the toy gun in showering the public with cash at the public market.

He said the money was a balato (bonus) from boxing champ Manny Pacquiao, who won a match that year. He denied that the cash was distributed to buy votes.

—WITH A REPORT FROM LEONCIO BALBIN JR.