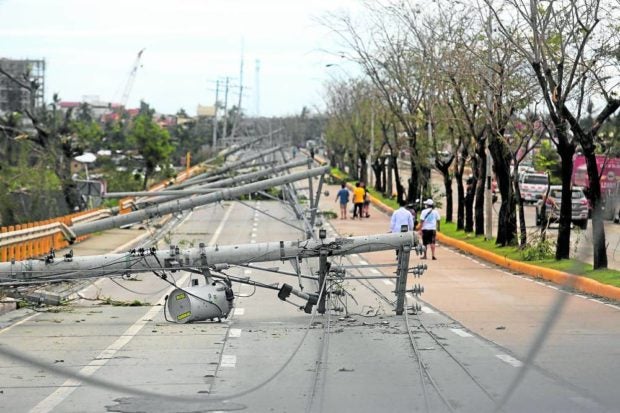 MATCHSTICKS AGAINST THE WIND Residents walk past a row of toppled electrical pylons in Talisay City, Cebu province, as they survey the damage wrought by Typhoon “Odette” (international name: Rai) on Friday. Power and telco outages left scores of towns and villages isolated across the Visayas and Mindanao. —AFP

MANILA — A consumer group has called on the Department of Energy to conduct a systems audit of the National Grid Corporation of the Philippines (NGCP) for what it called the grid operator’s “dismal failure” to ensure reliable supply of electricity as required by law.

In a letter to Energy Secretary Alfonso Cusi dated Dec. 21, 2021, the National Association of Electricity Consumers for Reforms, Inc. (Nasecore) said this failure had been repeatedly witnessed during supertyphoon Yolanda in 2013, typhoon Ruby in 2014 and the earthquake of 2017 due to its apparent inadequate, weak and grossly unreliable transmission system that are easily felled by typhoons.

Nasecore president Pete Ilagan said that this performance by NGCP is unacceptable and unfair to electric cooperatives and distribution utilities which bear the brunt of the blame from consumers. “Sadly, this is a recurring and perennial experience,” he said.

“Where has the huge annual funds provided by the consumers through their monthly rate payments and granted by the Energy Regulatory Commission (ERC) gone? This monies are meant to assure the consumers of a quality, reliable, secure and affordable supply of electricity,” he added.

Nasecore is asking the energy department to conduct an immediate and transparent audit of NGCP transmission system to determine the required upgrading and improvisation that will establish a resilient system nationwide. This audit means actual ocular inspection and documentation of areas hit by typhoons, Ilagan said.

Similarly, it is urging the ERC to conduct a regulatory audit of the funds it provided NGCP meant specifically for capital expenditures which covers the rehabilitation and upgrading of the nationwide transmission system.

Ilagan said they also want a review of the Concession Agreement of NGCP with the National Transmission Company (Transco) for possible violations as well as a review of NGCP’s congressional franchise by the Joint Congressional Energy Commission to protect public interest.