Rizal and the enduring faith of his followers, believers 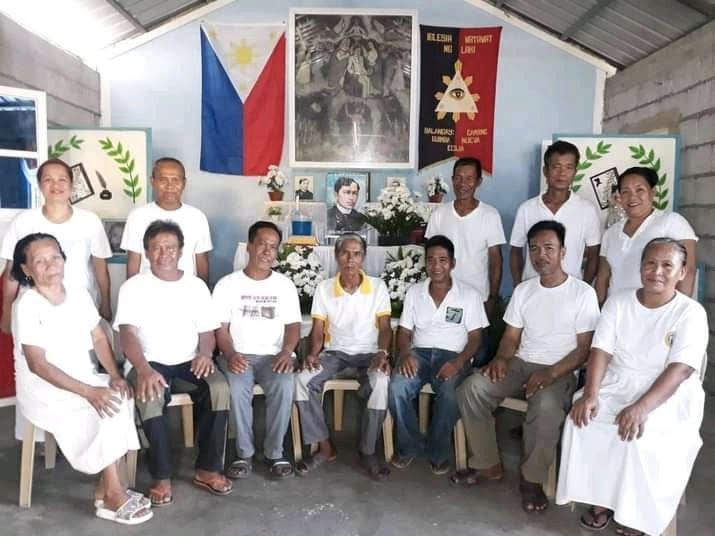 The elderly gather for a prayer service inside a chapel of the Iglesia Watawat ng Lahi in Nueva Ecija. | PHOTO COURTESY OF JENYLYN REOLENTE

MANILA, Philippines—Until the end, Jose Rizal was firm. He refused to give up his conviction even if it meant his death.

The execution of Rizal in 1896 lit the revolution against Spain which had governed the Philippines for 333 years. For Filipinos devoted to Rizal, his death was not only the dawn of a revolution.

His sacrifice was “divine.”

This year, the 125th since his execution in the then Bagumbayan (now Luneta), Rizalistas or those who had turned their belief in Rizal to a religion marked his death as a liberation for Filipinos from centuries of abuses by Spaniard conquerors.

“His death was the salvation of Filipinos from years of the Spanish government’s ill-treatment,” said Msgr. Eusebio Bolante, of the Iglesia Watawat ng Lahi (IWL).

“We are grateful for this day because every December 30, we remember his greatness,” he said. 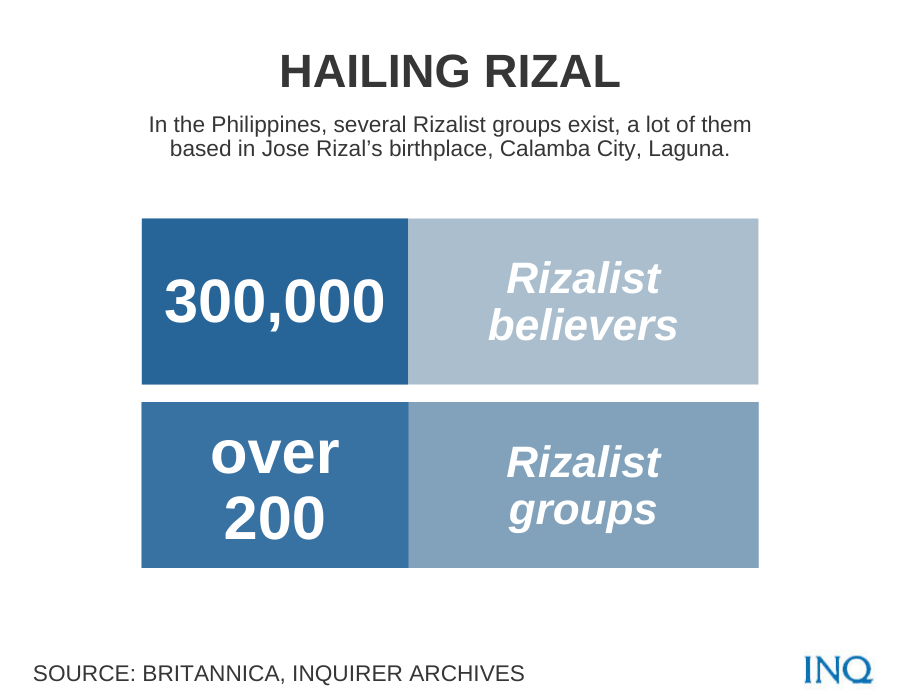 IWL is one of over 200 Rizalista groups in the Philippines, many of them based in Rizal’s birthplace, Calamba City in Laguna province. In the book “Kristong Pilipino: Pananampalataya kay Jose Rizal,” Nilo Ocampo talked about more than 21 Rizalista groups:

Bolante explained that IWL, which was established in 1936, views Rizal as the “Ikatlong Persona ng Diyos,” saying that he was the one Jesus Christ referred to in the Gospel when he said: “The comforter who came down to continue what Jesus Christ has started.” 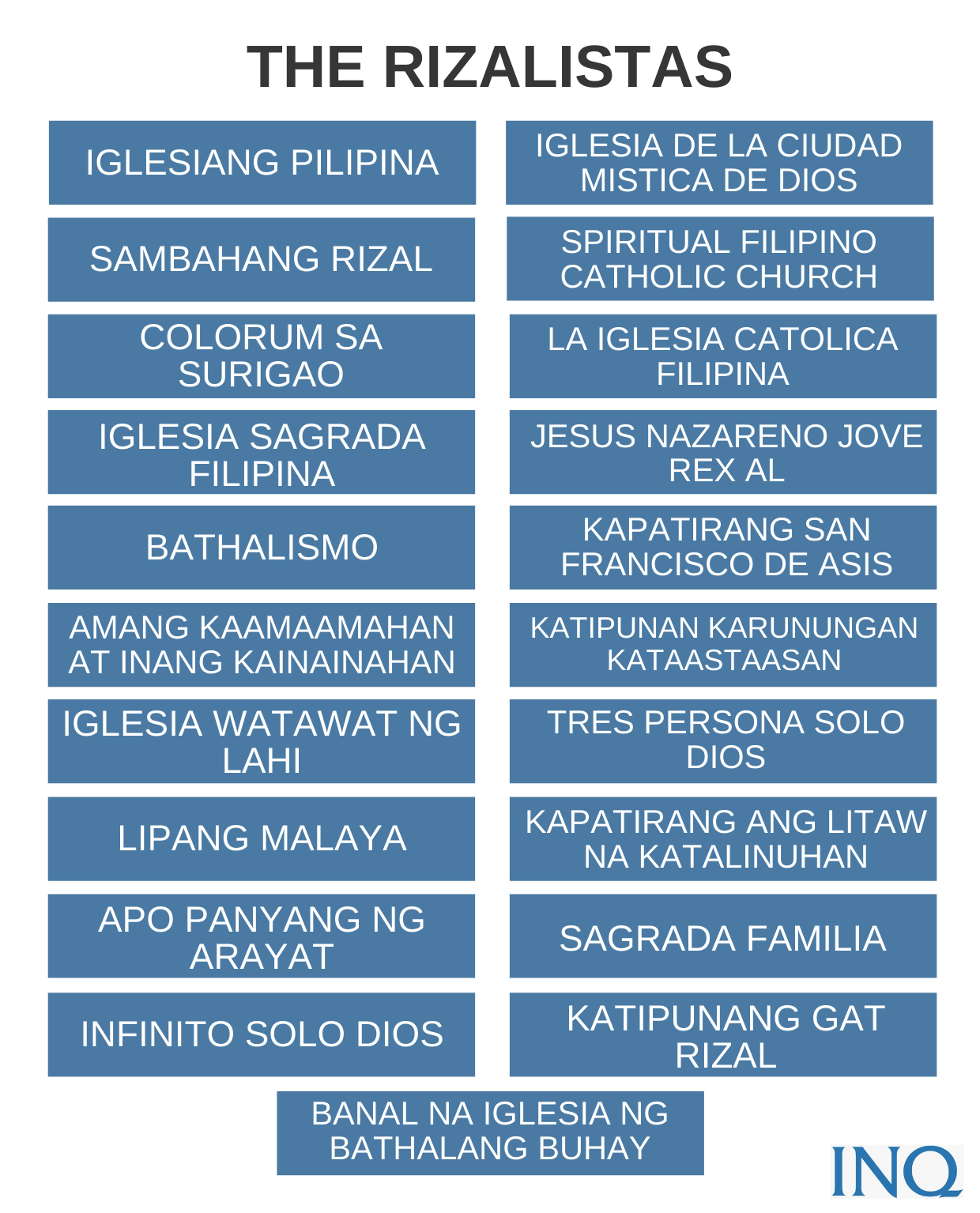 Bolante told INQUIRER.net that it was Rizal who freed Filipinos from abuses by Spain during the colonial period 1565 to 1898.

Rizal was executed on Dec. 30, 1896 in Bagumbayan after he was accused of fomenting rebellion against the Spanish government in the Philippines. Prior to his death, Rizal wrote extensively about rights and freedom, especially of Filipinos.

READ: Rizal, ‘woke’ in his own time

His two best known writings were the novels Noli Me Tangere and the El Filibusterismo.

Encyclopedia Britannica said there are at least 300,000 Rizalistas in the Philippines.

Last June, the National Historical Commission of the Philippines (NHCP) outlined Ocampo’s book and said Rizal’s life was filled with “relations” with Jesus Christ’s life, explaining that these were wielded by Rizalistas as the premise of faith:

As Rizalistas are always seen in white clothes inside prayer rooms filled with Rizal’s images, they were often branded as cults, but Prospero Covar said in his dissertations that they’re not. “The Rizalista is a social movement,” he said.

The NHCP said Covar defined social movement as “a conscious organized attempt by a group of people to create a new order of life.” He said the Rizalistas, specifically the IWL, have three principles: love of God, love of others and love of nation.

For Bolante, these teachings should be lived today because “it’s the key to free imprisoned minds and the way to a place where we can no longer be imprisoned.”

Covar said these principles are present in the IWL’s sayings: Maka-Diyos, maka-tao, and maka-bayan. This means the Rizalistas, specifically the IWL, wants its believers to live religious, societal and nationalist lives.