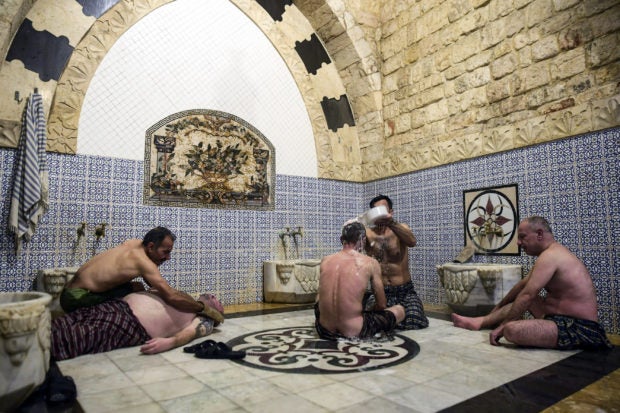 ALEPPO, Syria — The ancient bathhouses of Syria’s second city Aleppo are filling up again, not because of a revived fad, but due to power cuts that have made hot showers a luxury.

“We mainly rely on electricity to heat water at home, but the electricity is cut off most of the time,” said Mohammed Hariri from a crowded bathhouse where he had waited half an hour for his turn.

“Here, we take all the time we need showering,” the 31-year-old told AFP.

With their marble steam rooms, hexagonal fountains and distinctive domes, Aleppo’s bathhouses have for centuries served as a social hub where men come together to wash, listen to music and even eat.

READ: Syria, before the bombs fell

But shortages of water, fuel and electricity across war-torn Syria have also turned them into a refuge for those looking for a long, warm bath during the cold winter.

In Hammam al-Qawwas, one of more than 50 traditional bathhouses in Aleppo’s Old City, diesel fuel and firewood are used to power furnaces providing hot water and steam.

Under its arched dome, men swaddled in towels sit in one of many side rooms, some singing traditional Arabic tunes as they scoop up hot water from stone basins.

In an adjoining area, masseurs use soap and loofahs to scrub clean clients lying flat on the marble floor, as restrictions against the coronavirus pandemic seem a world away.

Hariri said he used to visit Aleppo’s bathhouses with his father and uncles as a child.

Now, he comes with his son — not to continue a tradition, but because the water at home is not enough for his family of five.

“At home you have to shower in five minutes, but at the bathhouse you can stay for five hours,” he said.

Many of the structures were severely damaged during several rounds of battles between regime forces and rebels.

Only around 10 have reopened since Aleppo returned to full government control in 2016, according to AFP correspondents.

Sitting at the reception room inside Hammam al-Qawwas, Ammar Radwan fielded calls from clients looking to book an appointment.

The 33-year-old who inherited the 14th-century bathhouse from his grandfather said he never thought business would bounce back.

“We reopened the hammam in 2017, after the battles in Aleppo ended, but we never expected to see such a turnout,” he told AFP while updating a client register.

Among the bathhouse’s regular customers is Jalal al-Helou, a 53-year-old father of three.

“I go to the bathhouse at least once a month for a good clean,” he told AFP from inside a washing room, a towel covering his wet body.

Like most of Aleppo’s residents, Helou usually has to make do with cold or lukewarm water at home.

Round-the-clock power cuts have reached 20 hours a day this year due to severe diesel fuel shortages.

Helou said he has sometimes had to resort to firewood instead of the electric water heater so his family can bathe.

“Our priority is to provide (hot water) for the children,” he said.

The situation is the same for fellow bathhouse patron Nader Mashlah.

“The last time I took a proper bath was two weeks ago,” the 58-year-old said after a scrub-down at the hammam.

At home, “priority goes to the children, and if there is some hot water left, my bath is quick and unsatisfying,” he added.

A government employee and father of six, Mashlah said he could afford few comforts in his own home.

But in the bathhouse, he was relaxing and smoking shisha across from a large fountain as other clients walked by.

“In the past, going to the bathhouse was mainly for entertainment,” he said in between puffs.

“Today, it has become a necessity at least once or twice a month.”