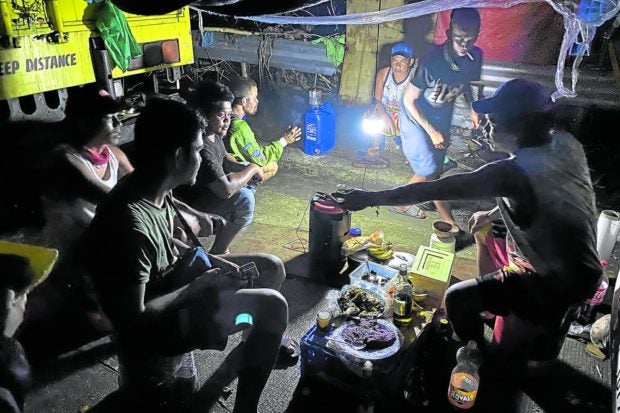 Truck drivers bound for Manila celebrate Christmas under a makeshift tent along the highway in Surigao City after they got stranded due to damage on the transport port terminal in Lipata caused by Super Typhoon Odette. PHOTO BY ERWIN M. MASCARIرAS

In a press briefing, Undersecretary Jonathan Malaya, Department of the Interior and Local Government (DILG) spokesperson, said that members of qualified families would each receive P1,000 in cash. The maximum amount per family, however, would be P5,000.

Malaya added that the DILG, along with the Department of Social Welfare and Development, and the Department of National Defense, had signed a joint memorandum circular listing the implementing guidelines for the distribution of the money.

The cash assistance will be released directly to local governments in provinces currently under a state of calamity.

They are given 15 calendar days to distribute the funds, although an extension may be granted, Malaya said.

Before distribution, local governments must post the list of beneficiaries on social media. In places without electricity or internet connection, copies of the list are to be posted in three conspicuous places in the barangay.

The allocation per local government will be based on a local budget circular to be issued by the Department of Budget and Management on Wednesday. The Department of Energy, meanwhile, reported that power has been returned to more areas hit by Odette although some would have to wait longer due to challenges hounding restoration teams.

On Wednesday, representatives from the National Electrification Administration (NEA), National Power Corp. (Napocor) and National Grid Corp. of the Philippines said that jump-starting the transmission and distribution of power in the Visayas and Mindanao continued to be hampered by the severe effects of the typhoon, two weeks since it made landfall.

These included the intermittent signal in restoration sites and the accessibility of these sites to the contingency teams; the bad weather, particularly in Bohol; the challenging terrain, especially in remote areas; and the inaccessibility of fuel.

Not ‘til February for Palawan

In Palawan, the transmission line of Delta P Inc. going to the Roxas substation might not be energized until February, according to Napocor.

Despite the setbacks, Energy Director Mario Marasigan said all transmission lines in Mindanao had already been restored and were being readied for transmission.

In the Visayas region, the actual demand for power has hit 1,101 megawatts or 82 percent of the island group’s available generating capacity.

NEA, the agency in charge of electric cooperatives in the provinces, said that 55.73 percent of its covered households already had power restored while of the 87 power plants operating under Napocor, which oversees power in remote areas, 69 were operational while 10 were on standby, and eight were still being assessed.

Marasigan added that Bohol, one of the hardest-hit provinces, might get partial electricity by tomorrow.