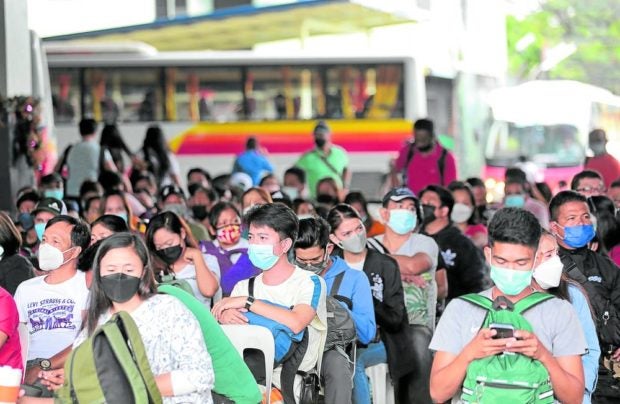 NOT PHYSICALLY DISTANT Passengers sit in line for bus rides close to one another in Cubao, Quezon City, on Wednesday, many forgetting to keep their physical distance from each other. It is one of the health measures that is not complied with strictly to prevent the spread of COVID-19, according to health officials. —GRIG C. MONTEGRANDE

MANILA, Philippines — The Department of Health (DOH) on Wednesday reported that the country’s COVID-19 positivity rate jumped to 4.5 percent and the independent pandemic monitor OCTA Research group said it was even higher than 5 percent in Metro Manila, warning that the rise could be more than just “a holiday uptick.”

The DOH said that 4.5 percent of 27,615 people who were tested on Monday were positive for the coronavirus, nearly twice the 2.6 percent reported on Tuesday from tests conducted on Sunday.

The World Health Organization (WHO) standard is a positivity rate of below 5 percent daily for at least two weeks—the maximum incubation period for the coronavirus — to consider COVID-19 transmission under control.

The health department also reported 889 new COVID-19 cases on Wednesday, more than double the 421 recorded on Tuesday, But it said that 889, or 98 percent, occured in the last two weeks with Metro Manila accounting for 564, or majority of the cases.

According to Health Undersecretary Maria Rosario Vergeire, cases were expected to increase due to holiday-related mobility and reduced compliance to minimum public health standards.

In a Twitter post on Wednesday, OCTA fellow Guido David said it was the first time that the positivity rate in the National Capital Region (NCR) had risen above 5 percent since Oct. 24.

He said the seven-day average positivity rate in NCR was now 2.4 percent.

“There is now concern that this is not just a holiday uptick. Please be advised that the situation is changing in the NCR and we must now be very mindful of minimum public health standards,” David said.

New daily infections rose to 1,765 on New Year’s Day and the positivity rate increased to 7.2 percent.

Health officials then warned of a postholiday rise in COVID-19 cases despite the ban on big Christmas parties and gatherings last year. But by Jan. 9, the positivity rate dipped to 4.4 percent although new daily cases rose to 1,952.Vergeire told reporters on Wednesday that health authorities were continuously monitoring the current situation.

She said, however, that the DOH could not say for certain that the increase in the number of cases was due to the Omicron variant of the coronavirus.

The Philippine Genome Center has detected four cases of the variant since the first entered the country from Nigeria on Nov. 30.

The latest case is a 38-year-old woman who arrived from the United States with her husband, who also tested positive for COVID-19 but not yet confirmed for Omicron.

The DOH said they found 21 other close contacts of the woman on the Philippine Airlines flight PR 127 which arrived in Manila on Dec. 10. It is awaiting test results for them and checking on their health status.

The 214 recoveries reported brought the total number of survivors of the severe respiratory disease to 2,778,131.

The death toll rose by 28 to 51,241. Seven deaths occurred this month and the others happened between June 2020 and November this year but were recorded only on Wednesday.

Health Secretary Francisco Duque III said in a radio interview that hospitals nationwide were ready for a “sudden increase” in COVID-19 cases.

But Vergeire appealed to the public and the local governments to observe safety protocols and for everyone to get vaccinated.

Nograles said at a press briefing that compliance with and enforcement of health protocols to prevent a case spike was a “shared responsibility” of both the public and the government.

“Let us not waste the sacrifices that we have made. That is our call,” said Nograles, who is also cochair of the Inter-Agency Task Force for the Management of Emerging Infectious Diseases (IATF).

The secretary also reminded local governments to enforce granular lockdown “when you see a clustering of cases.”At Wednesday’s Laging Handa briefing, Presidential Adviser on Entrepreneurship Joey Concepcion said he expected COVID-19 cases to decline in the first quarter of 2022 when people would have become less mobile after the holiday season “because they will have no more money” to spend.

Vaccination remains a key to combating the harm done by COVID-19 on the economy, he said, citing the controlled spread of the Delta variant as a result of the mass inoculation drive.

The start of the booster shots is expected to do the same for Omicron, Concepcion said, adding that local governments should be pressured to do their part in conducting primary vaccination and booster drives.

The WHO on Wednesday said Omicron still posed a “very high” risk and could overwhelm health-care systems, warning that the highly transmissible variant had fueled record outbreaks in many countries.

Case numbers have shot up 11 percent globally in the last week, forcing governments from China to Germany and France to find a difficult balance between antivirus restrictions and the need to keep economies and societies open.

The Netherlands and Switzerland said Omicron had become the dominant strain in their countries, and while some studies suggested it causes milder COVID-19, the WHO urged caution.

“Consistent evidence shows that the Omicron variant has a growth advantage over the Delta variant with a doubling time of two to three days,” it said.

The WHO said early data from Britain, South Africa and Denmark—which currently has the world’s highest rate of infection per person—suggested there was a reduced risk of hospitalization for Omicron compared with Delta.

But it added that further data was needed to understand Omicron’s severity.

—WITH REPORTS FROM INQUIRER RESEARCH AND AFP