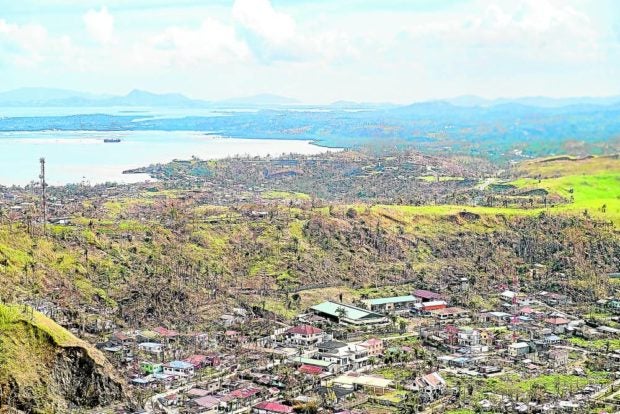 The coastline damage of Typhoon “Odette” in Surigao del Norte is shown in a Dec. 22 photo. —MALACAÑANG PHOTO

MANILA, Philippines — The Department of Agriculture (DA) reported on Tuesday that damage and losses caused by Typhoon “Odette” (international name: Rai) to Philippine agriculture has reached P8 billion and it is still expected to increase in the coming days.

Even after leaving the Philippine area of responsibility more than a week ago, the agency said in a bulletin that the typhoon-affected 113,479 farmers and fishers in 11 regions, mostly in the Visayas and parts of Mindanao.

The DA has prepared P2.9 billion in financial aid for affected farmers and fishers, including P1 billion worth of quick-response funds for the rehabilitation of affected areas.

Furthermore, the Agricultural Credit Policy Council, through its Survival and Recovery Assistance Program, has readied P500 million for 20,000 farmers and fisherfolk at P25,000 each.

Reporting to President Duterte on Monday, Agriculture Secretary William Dar said the fisheries sector was the hardest hit, followed by rice and coconut.