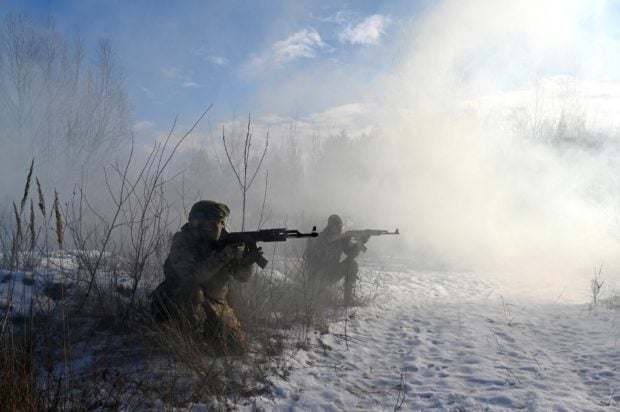 Ukrainian Territorial Defense Forces, the military reserve of the Ukrainian Armes Forces, take part in a military exercise near Kiev on December 25, 2021. – The trainees are part of reservist battalions set-up to protect a district in Kiev in the event of an attack on Ukraine’s largest city. Dozens of civilians have been joining Ukraine’s army reserves in recent months, as fears have mounted that Russia, which Kiev says has massed around 100,000 troops on its side of the border, is plotting to launch a large-scale attack. (Photo by Sergei SUPINSKY / AFP)

The would-be Ukrainian soldiers, who include architects and researchers in their ranks, return fire with replica Kalashnikovs as imitation smoke grenades explode around them.

“I believe that every person in this country should know what to do… if the enemy invades their country,” Daniil Larin, a 19-year-old university student, told AFP during a short break from the exercises.

Larin was one of about 50 Ukrainian civilians who drove from Kiev to an abandoned Soviet-era asphalt plant on a recent weekend afternoon to train for how to defend their country in the event of a Russian invasion.

Dozens of civilians have been joining Ukraine’s army reserves in recent months, as fears have mounted that Russia — which Kiev says has massed around 100,000 troops on its side of the border — is plotting to launch a large-scale attack.

Ukraine’s army, which totals 215,000 soldiers, has been battling a Moscow-backed insurgency in two breakaway regions since 2014 in a long-simmering conflict that has claimed over 13,000 lives.

While Moscow has denied it is planning an invasion, Russian President Vladimir Putin has not excluded a military response should the US-led NATO alliance — which Ukraine wants to join — expand eastward.

The Ukrainian reservists, who have ballooned to about 100,000 members, have been learning “how to handle weapons, how to behave in a battle environment, how to defend cities,” Larin told AFP.

Marta Yuzkiv, a 51-year-old doctor, believes that the Russian army is “far superior” to Ukraine’s and the risk of a full-scale invasion is “high enough” to have joined the reserves.

“Only if everyone is ready to defend our land, then there will be a chance,” she said.

Since joining up in April, when Russia first deployed around 100,000 troops on Ukraine’s border, Yuzkiv has trained for several hours every Saturday in providing tactical medicine, shooting automatic rifles and deploying checkpoints.

While the army provided her with a military uniform, she spent her own money on a helmet, bulletproof jacket and tactical goggles.

The trainees are part of reservist battalions set up to protect Kiev in the event of an attack on Ukraine’s largest city.

One battalion commander, Vadym Ozirny, said that after mobilizing at a rendezvous point, the reservists will get to work protecting administrative buildings and critical infrastructure as well as helping residents evacuate.

Denys Semyrog-Orlyk, one of the most experienced reservists in the unit, said he is ready to counter a real offensive.

“I have been living for the eighth year with the thought that until we give Russia a good blow in the face, they will not leave us alone,” the 46-year-old architect told AFP.

Russia planning Ukraine offensive with up to 175,000 troops — news reports