Russia planning Ukraine offensive with up to 175,000 troops — news reports 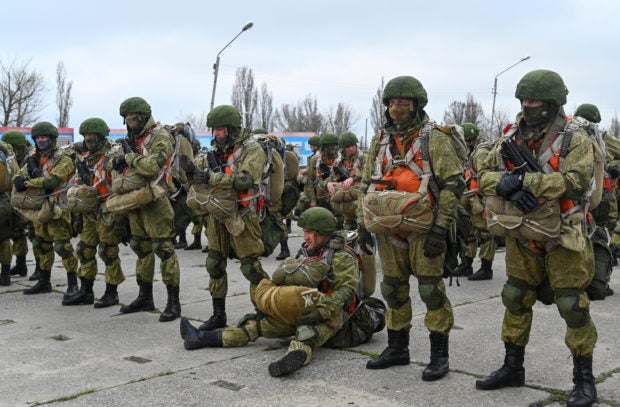 Service members of the Russian airborne forces get wait before boarding Ilyushin Il-76 transport planes during drills at a military aerodrome in the Azov Sea port of Taganrog, Russia April 22, 2021. REUTERS file photo

WASHINGTON, United States — Russia is orchestrating a multi-front offensive involving up to 175,000 troops as soon as next year, The Washington Post reported Friday, as Ukraine warned that a large-scale attack may be planned for next month.

Moscow’s plans “involve extensive movement of 100 battalion tactical groups with an estimated 175,000 personnel, along with armor, artillery and equipment,” a US administration official told the Post on condition of anonymity.

While the Pentagon told AFP it would not comment on intelligence matters, it said it was “deeply concerned by evidence that Russia has made plans for aggressive actions against Ukraine.”

“We continue to support de-escalation in the region and a diplomatic resolution to the conflict in eastern Ukraine,” Pentagon spokesman Lieutenant Colonel Tony Semelroth said.

Russian forces are currently massing at four points, with 50 battlefield tactical groups deployed in addition to the fresh arrival of tanks and artillery, the Post said, citing an unclassified US intelligence document.

Movement to and from the border is meant to make any tactical moves murky and cause uncertainty, the Post said, citing its sources.

US President Joe Biden earlier in the day said he was preparing fresh policies to halt any Russian plans to invade Ukraine after both Washington and Kiev reported that Moscow had massed troops near its border.

Ukrainian Defense Minister Oleksiy Reznikov estimated that Russia has around 100,000 troops near the border. Russia denies any military build-up.

“The most likely time to reach readiness for escalation will be the end of January,” Reznikov said.

Following a visit with his Russian counterpart on Thursday, US Secretary of State Antony Blinken said Washington had “deep concerns about Russia’s plans for renewed aggression against Ukraine.” He warned Moscow of “serious consequences” if Russia “decides to pursue confrontation.”

Biden and President Vladimir Putin are due to hold a video call to discuss the rising tensions, both sides confirmed Friday.

Biden told reporters in Washington he was putting together “the most comprehensive and meaningful set of initiatives to make it very, very difficult for Mr Putin to go ahead and do what people are worried he may do.”

Moscow seized Crimea from Ukraine in 2014 and has since backed separatists fighting Kiev in the east of the country. The conflict has left more than 13,000 dead.