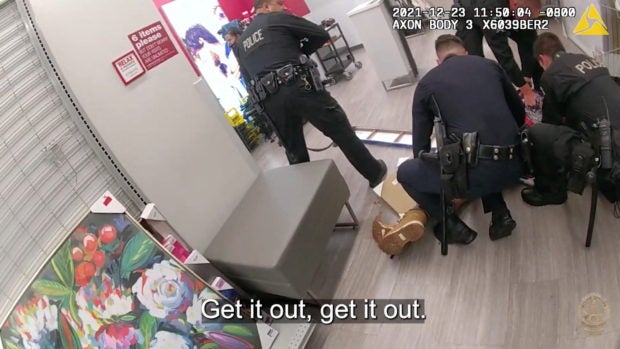 Bodycam footage shows Los Angeles Police Department officers surrounding the assault suspect at a shopping mall in North Hollywood, California, U.S., December 23, 2021 in this still image taken from a video released by the LAPD after the accidental shooting of a teenage girl killed in a clothing store when a bullet pierced the wall of her dressing room as officers opened fire on an assault suspect. Video taken December 23, 2021. LAPD/Handout via REUTERS

LOS ANGELES — The Los Angeles Police Department was expected to release video footage on Monday from the accidental shooting of a teenage girl killed in a clothing store when a bullet pierced the wall of her dressing room as officers opened fire on an assault suspect.

Police say the stray round that struck the 14-year-old girl, identified in local media accounts as Valentina Orellana-Peralta, apparently was fired inadvertently into the changing room by an LAPD officer from the other side of the wall.

At the time of the Dec. 23 shooting, the girl was shopping with her mother for a dress for her upcoming quinceanera, a 15th birthday celebration in Hispanic traditions, Los Angeles news outlets reported.

LAPD officers dispatched to the store were responding to multiple radio calls of an assault with a deadly weapon and a possible shooting in progress, police said.

The suspect, who police said had just attacked a woman on the upper floor of the clothing store when officers arrived, was also killed in the shooting. The woman was taken to an area hospital for treatment of her injuries.

The girl was discovered shot to death moments later, after officers noticed a bullet hole in a wall directly behind where the suspect had been standing and searched the premises to find the 14-year-old in a dressing room on the other side of that wall in the line of fire, police said.

Assistant LAPD chief Dominic Choi told reporters in a briefing that day that investigators believe the girl had been struck by a round fired from a police officer’s gun. That officer was placed on administrative while an investigation is under way, an LAPD spokesman said.

Choi said then that no firearm had been immediately recovered from the suspect, but police found a heavy cable lock they believe the man may have used to beat a woman in the store. The motive for the attack, and whether the suspect was related to his victim, was not immediately clear, Choi said, adding that the girl was believed to have been an innocent bystander.

The assistant chief said investigators would review footage of the incident captured by officers’ body-worn video cameras and surveillance cameras in the store.

LAPD Chief Michel Moore issued a statement promising a “thorough, complete and transparent” investigation of the tragedy, and ordered “critical incident video,” radio transmissions and other information from the shooting to be publicly released on Monday.

The California attorney general’s office also was to open an independent investigation.