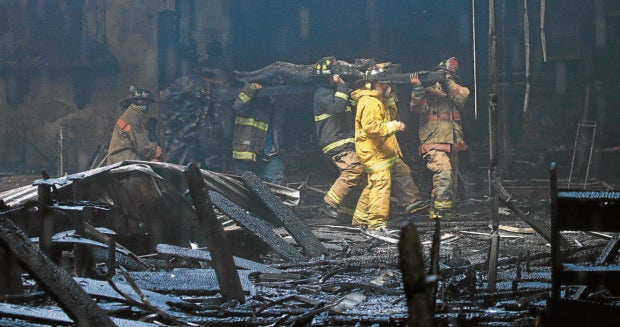 Firemen bring out the wooden figure of the Nazarenong Poon ng Pandacan from the Sto. Niño Parish church in Pandacan, Manila which was razed by fire. INQUIRER PHOTO/LYN RILLON

MANILA, Philippines  The Philippine Daily Inquirer’s photograph of the retrieval of the statue of the crucified Christ in a Manila fire and the paper’s feature on the first Mass held on the island of Limasawa won awards in the print category of the 43rd Catholic Mass Media Awards (CMMA).

Inquirer photographer Lyn Rillon bagged the best news photograph for capturing the retrieval operations in the wake of a fire that gutted a portion of Sto. Niño de Pandacan Parish church in Manila. Her work, titled “Icon Search and Rescue,” came out on the front page of the Inquirer on July 11 last year.

Entries from other Inquirer photographers named finalists in this category were “A River of Rage Runs Through It” by Marianne Bermudez, “Eerie Landscape” by Grig Montegrande, and “Iconic Church on Lockdown” by Richard Reyes.

Inquirer correspondent Joey Gabieta was given the special citation in the best special feature category for his story, “Limasawa: Christianity’s Cradle,” that tells of the Southern Leyte island’s historical significance as the Catholic Church celebrated the 500th anniversary of the first Mass on Philippine soil. The story was published in the Regions section on March 28 this year.

S&T Post, the Department of Science and Technology’s quarterly publication, won the top honors for “Fides In Scientia: Faithfully Serving the Nation through Science” by Allyster Endozo.

Among the finalists in the same category were Inquirer reporter Mariejo Ramos for her special report on how urban poor communities began gardening during the pandemic, and Inquirer reporter Vincent Cabreza’s news feature on how medical front-liners turned to each other for support while they continued to respond to COVID-19 patients in sometimes unfavorable working conditions.

‘Time for vigilance’ Named finalists in the best editorial cartoon category were Inquirer’s resident cartoonist Albert Rodriguez for his work on Pope Francis’ support for civil rights for the LGBTQ community, “Who Am I to Judge,” and former Inquirer cartoonist Steph Bravo-Semilla for her illustration of health-care workers as modern-day heroes.

Held virtually for the second consecutive year, CMMA paid homage to the hard work and dedication of mass media workers in print, radio, television, film and advertising despite the restrictions and risks brought by the coronavirus.

With the theme, “Gifted to Give,” the award-giving institution this year received 366 entries from various platforms “that promote Christian values and ideals.”

“More than ever, this is a time to be vigilant and continue to be guardians of mass media,” CMMA acting chair Edgard Cabangon said during the prerecorded telecast.

According to Cardinal Jose Advincula, Manila archbishop and CMMA honorary chair, this year is “a very significant time” for the Catholic Church as it commemorates the 500th year that Filipinos “have embraced and nurtured the faith through generations.”