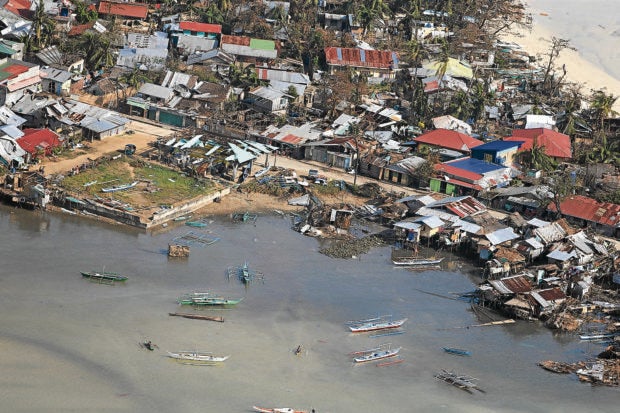 ISOLATED The island town of Araceli on Monday remains isolated from mainland Palawan because of downed electricity and communication lines after it was hit on Dec. 18 by Typhoon “Odette” (international name: Rai), which also destroyed 90 percent of government and private properties in the town. —PHOTO COURTESY OF THE PALAWAN PROVINCIAL DISASTER RISK REDUCTION AND MANAGEMENT OFFICE

Lawyer Christian Jay Cojamco, the provincial information officer, on Monday said the figures on the damages sustained by agriculture and farm structures, government and private infrastructure, utilities system and residential houses were based on their partial assessment in 11 of Palawan’s 23 towns and in Puerto Princesa City.

The provincial government will use the 2021 surplus budget of around P200 million as an initial rehabilitation fund, as the province eyes typhoon rehabilitation to go full swing by next year, Cojamco said.

“We don’t have enough for now. By next year, we will include annual budget for rehabilitation or realign budget. Rehabilitation will be a choice between new projects and the life of the residents in affected areas. We have to sacrifice some of the projects,” Cojamco said.

However, Cojamco assured that “no Palawenyo will be hungry” this holiday season, as the government and private entities continue to aid typhoon victims.

The Palawan Provincial Disaster Risk Reduction and Management Office has set aside some P12 million as financial assistance to residents, providing around P3,000 cash to each affected family based on the roster provided by the Provincial Social Welfare and Development Office.

On top of this, rehabilitation assistance between P5,000 to P10,000 will also be provided to each household depending on the type of damage and materials, to be assessed by the Provincial Engineering Office, said Cojamco.

The initial rehabilitation funds were drawn from the assistance given by the Office of the President (P118 million) and P30 million from the provincial government.

The provincial government also warned profiteering local business establishments who were taking advantage of the people’s demand for food, water and other basic needs.

“We will close down your business. We are already coordinating with the DTI (Department of Trade and Industry),” Cojamco warned establishments that would not abide by the price freeze imposed by the DTI in typhoon-hit areas. INQ