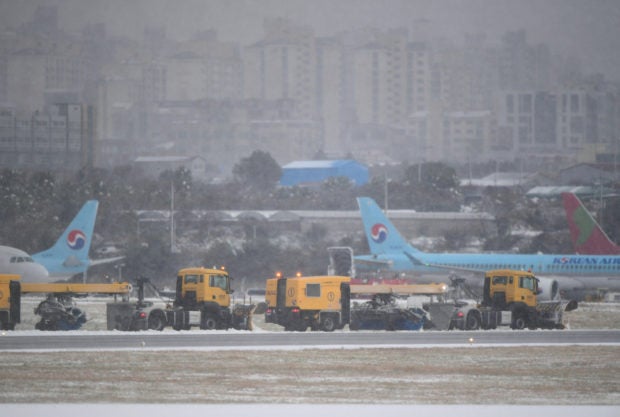 SEOUL — Over the Christmas weekend, extreme cold with heavy snowfall hit large parts of Korea, with temperatures dropping to as low as minus 25.4 degrees Celsius in some regions and heavy snow leading to flight cancellations.

With the mercury beginning to fall from Saturday afternoon, the capital city’s Sunday morning low reached minus 16 C, the coldest temperature in December in nearly 41 years. The lowest temperature ever recorded in Seoul in December was minus 16.2 C on Dec. 29, 1980.

According to the Korea Meteorological Administration, cold wave alerts were issued in most regions in Korea over the weekend.

Cold wave alerts are issued when the day‘s low temperature is expected to fall 10 degrees or more to less than 3 C and record 3 degrees lower than the day’s average. It can also be issued when the morning lows are forecast to be lower than minus 12 C for two days or longer.

The KMA can also issue a cold wave alert if severe damage is expected from the rapidly dropping temperatures.

On Sunday, the morning temperature in Cheorwon, Gangwon Province, dropped to minus 25.4 C, marking the coldest figure of the winter. Paju and Yeoncheon in Gyeonggi Province also dropped to minus 20.7 C, falling below minus 20 C for the first time this year.

Some parts of Korea were blanketed with heavy snowfall. On Saturday, Gangwon Province saw up to 55.9 centimeters of snow over the Christmas weekend. Hallasan on Jeju Island also experienced as much as 16.6 cm.

Due to the heavy snow, the runway at Jeju International Airport was closed for about an hour Sunday morning, leading to flight cancellations and more delays.

Snow continued Sunday in western parts of Korea and piled up in North and South Jeolla Provinces. The KMA forecasted the snow to continue until Monday.

As to the reasons behind the extremely cold weather across the country, the KMA explained that high pressure that developed in Russia weakened the jet stream, pushing a high-altitude patch of cold air that fell as low as minus 40 C from the northwest.

The KMA said that temperatures are expected to gradually go up from Monday afternoon. Temperatures will return to normal Tuesday, but the cold is expected to return from Friday and continue through Saturday.

The weather agency cautioned people to stay warm, as a rapid drop in temperature can lead to weaker immunity.