NAIROBI, Kenya—An Italian cruise liner carrying more than 1,000 people was adrift without power in the pirate-infested Indian Ocean after a fire erupted in its generator room. The blaze, which was extinguished, caused no injuries, officials said. 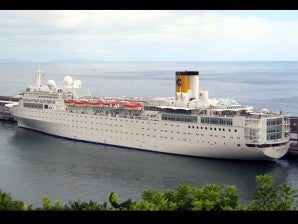 The Italian coast guard says a fire has broken out on an the Costa Allegra cruise ship off the Seychelles islands, Monday and the ship is adrift, but the passengers are safe. AP

Two tug boats from the island nation of Seychelles were steaming toward the drifting Costa Allegra, which had 636 passengers and 413 crew members on board, but they were not expected to arrive until Tuesday afternoon at the earliest.

Monday’s fire on the Costa Allegra immediately raised fears, since it occurred only six weeks after one of its sister ships, the Costa Concordia, hit a reef and capsized off Italy, killing 25 people and leaving seven missing and presumed dead. Both ships are operated by Costa Crociere SpA, which is owned by the Florida-based Carnival Corp.

However, company officials rushed to play down concerns.

The Costa Allegra is adrift “and being pushed by the current. It is stable and upright,” Giorgio Moretti, the director of nautical operations for Costa Crociere SpA, told reporters in a conference call late Monday from company headquarters in Genoa, Italy.

No one was injured in the fire in the generator room and the cause of the fire was under investigation, Moretti said. The fire knocked out power to the ship’s engines as well as to its lights and air conditioning.

Italian Coast Guard officials said emergency generators were keeping the ship’s control room illuminated and communications equipment such as radios running. Officials said the cruise liner was holding steady, despite 5-foot (1.5 meter) waves in the area and passengers were being kept in the ship’s big communal rooms, not in their cabins.

Moretti, a longtime Costa captain, said he expected the 636 passengers aboard would spend the night on outside decks. Among them were 212 Italian, 31 British and eight US passengers, he said. Four of the passengers were children ages three or younger.

Costa Crociere SpA said in a statement the ship was about 20 miles (32 kilometers) from Alphonse Island, one of the atolls in the Seychelles, a nation of islands and atolls that is a popular tourist destination.

The Allegra, whose Italian name means “merry,” or “happy,” had left northern Madagascar, off Africa’s southeast coast, on Saturday and was cruising toward the port of Victoria, Seychelles’ capital, when the fire erupted. Costa said the Allegra had been due in Victoria on Tuesday.

Moretti said an armed nine-member Italian military team on anti-pirate duty was aboard the Allegra, but he insisted the maritime region where the ship was now “isn’t a high risk area for pirates.”

“If pirates attack, the armed guards on board will respond. But as far as I am aware, no pirates have been sighted in the area,” said Seychelles presidential spokeswoman Srdjana Janosevic.

A cargo ship was due to reach the Costa Allegra early Tuesday, and Moretti said it would bring batteries and otherwise help with communications. On Tuesday morning, a helicopter is expected to arrive, ferrying in “fresh food, cell phones and walkie talkies.”

Tugs from the Seychelles island of Mahe, the largest island in the Indian Ocean archipelago, will arrive Tuesday afternoon.

“Once they arrive, they will decide which port” to take the Allegra to, Moretti said. “It depends on sea conditions.”

Moretti said one possibility was evacuating passengers from the Allegra on lifeboats to Alphonse Island, then having them fly from its small airport to Mahe island. He also said 15 Costa engineers, technicians and other officials were flying to Mahe in hope of reaching the Allegra by air to repair its generators.