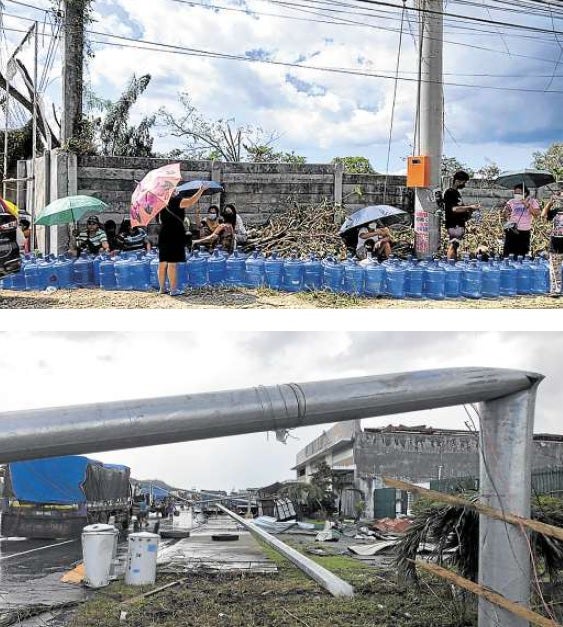 AFTERMATH The country’s water and power providers are working double time to restore supply in areas battered by Typhoon “Odette” in the Visayas and Mindanao. Queues for drinking water, like in Tagbilaran City (top), and toppled electric posts and street lamps, like in Surigao City (above), are familiar sights in these regions days after the typhoon struck. —AFP AND GERMELINA LACORTE

Water and power providers are finding it difficult to restore supply in provinces struck by Typhoon “Odette” (international name: Rai) in the Visayas and Mindanao, as they need at least two more weeks to fix distribution lines and start normal operations.

Water districts may not be able to go back to their normal operations until the first week of January, leaving affected families without a stable water supply during Christmas and New Year, Mamondiong said.

On Thursday, six teams for each region were set to be deployed to assess the extent of the damage. The challenge, however, was securing flights for LWUA personnel.

Regional reports submitted to the LWUA showed that some areas in Caraga, Negros Island, Cebu and Leyte have yet to establish communication with the national office.

In Surigao del Norte, road obstructions prevented ground personnel from visiting the area. In Butuan City, pipelines were damaged and washed out by severe flooding while in Samar, pipelines and bridge crossings were also damaged.

According to the LWUA, the continuous power outage is slowing down efforts to fix the water supply.

The Department of Energy (DOE) earlier committed to restoring power to typhoon-stricken areas before Christmas, but ongoing assessment on the ground showed that some areas may not have electricity until Dec. 31 or later.

Typhoon damage to the power sector has reached P1.31 billion, based on the latest report of the National Electrification Administration (NEA) and the National Power Corp. (Napocor).

The NEA and the Napocor are responsible for monitoring the power being distributed to provinces and to areas not connected to the main grid, respectively.

The figure may further swell once authorities are able to assess areas that still cannot be surveyed as road clearing operations are still underway, and with some isolated areas still unreachable.

About 3.92 million households were also estimated to have been adversely affected by the outages, according to the NEA and the Napocor.

As of Thursday, reports showed that 80 percent of the damaged grid lines had been restored by ]National Grid Corp. of the Philippines (NGCP), but for these lines to transmit power, operations of distributors, such as electric cooperatives and small power utility groups, should also be restored as well.

However, only 30 percent of electric cooperatives have been rehabilitated, said Ernesto “Butch” Silvano Jr., head of the NEA Total Electrification Department. About P1.12 billion worth of damage was incurred by these cooperatives, he added.

He noted that while most power plants and grid lines had been repaired and restored, electricity would not be transmitted unless distribution lines were ready. INQ