ODETTE’s FURY. Surigao City’s favorite venues for events and conventions is stripped of its roof and walls as Odette made landfalls on Siargao and Dinagat islands and swept through this northernmost tip of Surigao del Norte. GERMELINA LACORTE

SURIGAO CITY—Before typhoon Odette wrought havoc in this northernmost city of Surigao del Norte, the City Cultural Center used to be one of the favorite venues for events, weddings and conventions here.

But after typhoon Odette made its landfall on the neighboring Siargao and Dinagat Islands on Dec. 16 and battered this area with winds of up to 193 kilometers per hour, what remained of this once beautiful landmark is the skeletal frame of its former glory.

Karen Lopez Edelior, 35, a utility worker for the city government, along with four other families, had sought refuge in the 14-year old building because the other evacuation sites in the city had already run out of space to accommodate them.

Since the building was built only in 2008, they thought it was relatively new compared to the other buildings in the area and so, she and her fellow workers thought it was safe, she said.

But when Odette started battering the city, its glass windows were shattered, the hardiflex ceiling gave way and came crashing down and a huge part of the roof was blown away.

Edelior said she heard the roar of the winds, followed by the sound of glass crashing as Odette made her entry to the city around 2 p.m. on Thursday, Dec. 16.

She said they were terrified that they would get hurt by glasses flying from the shattered windows that they ran to the wooden-walled audio room, where they sat crouched for hours. 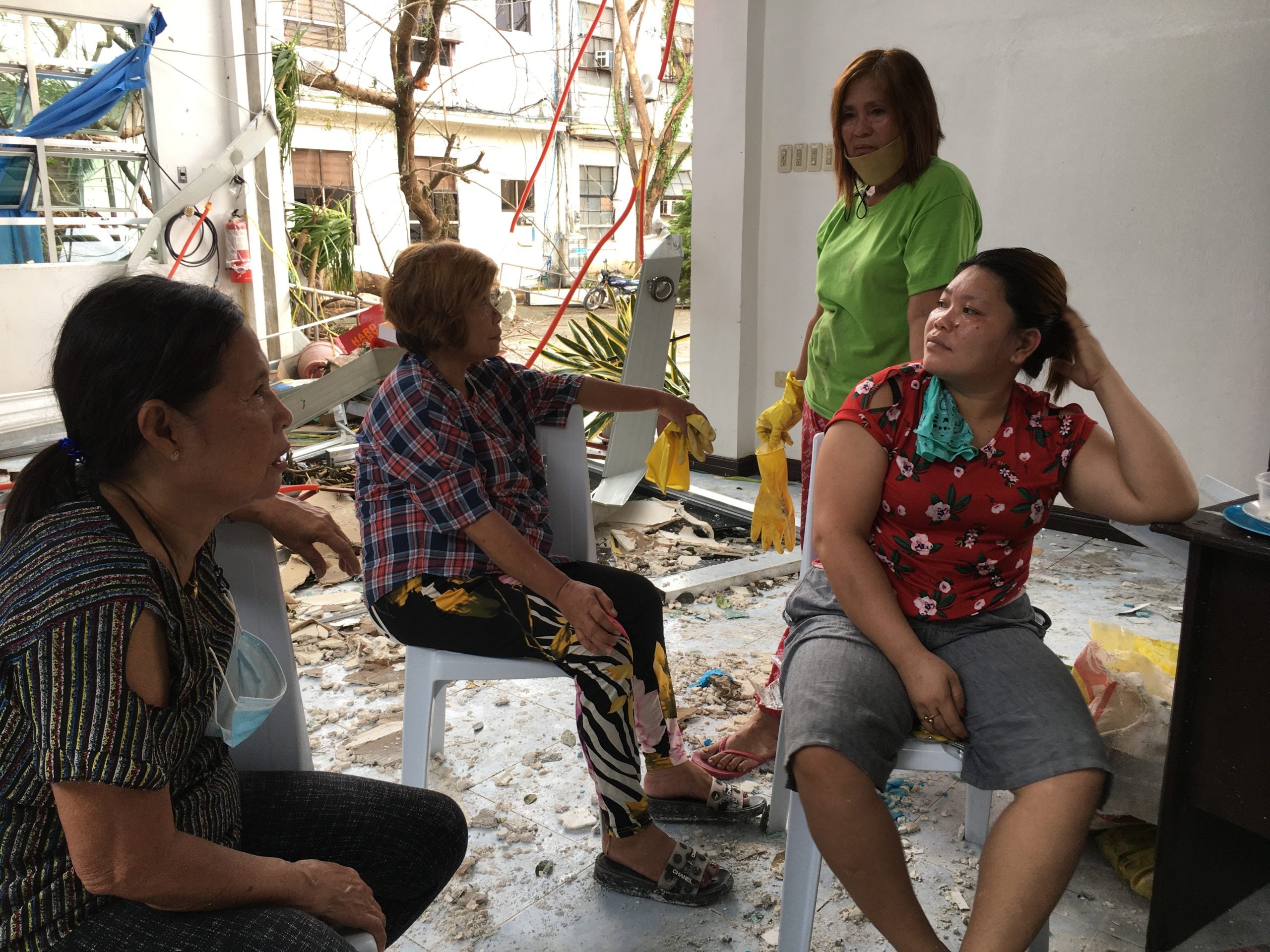 City utility workers await much-needed relief as they try to survive the aftermath of Odette’s fury and the delayed payment of their salaries. GERMELINA LACORTE

“I was worried about the shards coming from the windows, that’s why I took the children with me and ran towards the audio room,” said Edelior. “We were hunched there together from 2 pm, when Odette started blowing up to 5 pm, when we were rescued,” she said. “After a while, the whole place seemed to have calmed down.”

When Odette left, only the skeletal frame of what used to be the CCC’s grand structure remained.

As Edelior and fellow workers cleaned up the debris, they said that they, like the building, also badly needed help. Even before the typhoon came, their salaries were already delayed for one and a half months.

“It’s hard to have no money during the typhoon,” said Edelior’s companion, who like her also took a job order from the city government. She recalled having to shell out P500 just for their fare going to and from the evacuation site.

“Normally, we are already preparing the payroll for our Christmas bonus about this time. But we still have to process our payroll for November yet before we can process the Christmas bonus, so, how are we going to get by? We really need help,” said another worker.

At the municipal social and development office, Lalaine Pantilo, officer-in-charge, told the Inquirer that the city government would no longer be giving direct aid to displaced residents because they were coursing the assistance through the barangay captains.