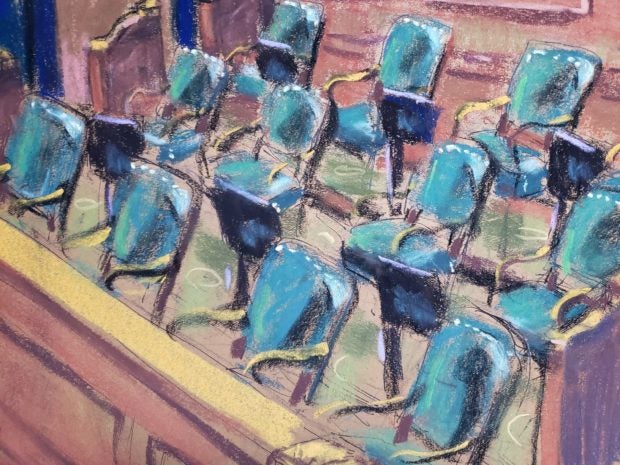 Empty seats are seen as the jury continues deliberations during the trial of Ghislaine Maxwell, the Jeffrey Epstein associate accused of sex trafficking, in a courtroom sketch in New York City, U.S., December 22, 2021. REUTERS/Jane Rosenberg

NEW YORK — Jurors in British socialite Ghislaine Maxwell’s sex abuse trial asked to review transcripts of the testimony of additional witnesses on Wednesday, as the second full day of deliberations neared its close.

Maxwell, 59, is accused of recruiting and grooming teenage girls for financier Jeffrey Epstein, her ex-boyfriend and employer, between 1994 and 2004. She has pleaded not guilty to six counts of sex trafficking and other crimes. She also faces two perjury charges that will be tried separately.

During the three-week trial in New York, the jurors heard emotional and explicit accounts from four women who placed Maxwell at the center of their abuse by Epstein, who died by suicide in a jail cell in 2019 at the age of 66 while awaiting trial on sex abuse charges.

On Tuesday, they requested to review the testimony of three of the women: Jane, Carolyn, and Annie Farmer. Maxwell’s lawyers focused their defense on undermining the women’s credibility and questioned them aggressively about why their stories appeared to shift over the years.

After deliberating for more than six hours on Wednesday, jurors sent a note to U.S. District Judge Alison Nathan asking to read transcripts of the accounts of the fourth accuser, Kate, and Juan Alessi, the former house manager at Epstein’s Palm Beach, Florida estate who said he saw Jane at the property.

The woman testifying under the pseudonym Kate said she was 17 in 1994 when Maxwell introduced her to Epstein in London. Kate testified that she then had several sexual encounters with Epstein.

Nathan instructed the jury that Kate was above the age of consent at the time, so she was not the victim of any crime, but they could consider her testimony if they found it useful in evaluating the charges against Maxwell.

Along with the trials of movie producer Harvey Weinstein and singer R. Kelly, Maxwell’s case is among the highest-profile trials to take place in the wake of the #MeToo movement, which encouraged women to speak out about sexual abuse by famous and powerful people.

Maxwell’s defense has also argued that prosecutors are scapegoating her because Epstein is no longer alive.