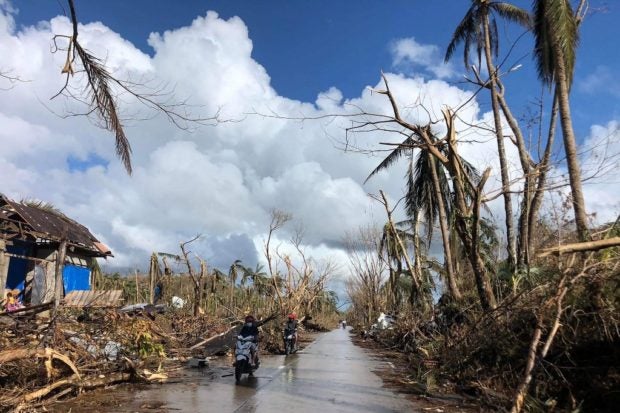 Motorists speeds past fallen coconut trees at the height of Super Typhoon Odette along a highway in Del Carmen town, Siargao island on December 20, 2021, days after the super typhoon hit the province. (Photo by Roel CATOTO / AFP)

“Ang numero ko dito sa Siargao is 19… So far as per information, wala,” Matugas said in an interview with Teleradyo when asked if there were any tourists who perished during the onslaught of the typhoon.

(Our figures here in Siargao is 19 deaths… So far as per information, there were no tourists involved.)

“We conducted pre-emptive evacuation so naka-evacuate lahat (so everyone was able to evacuate),” he added.

Matugas said distribution of relief goods are still ongoing in different barangays and municipalities in the island. However, he said some island barangays are hard to reach due to transport and communication limitations.

Further, Matugas said there is still no electricity in Siargao Island while only selected areas have limited telecommunication systems available.

(Our call is for food packs and water to be sent here. Our number three need is shelter since 90 percent of the residents here no longer have a home.)

Typhoon Odette made its first landfall in Siargao Island on Thursday, December 16, leaving billions-worth of damages.