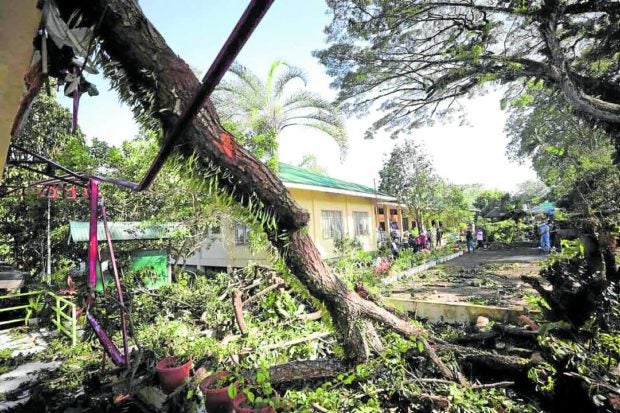 FALLEN TREE A portion of Valencia Central Elementary School in Negros Oriental is partially damaged after a huge tree fell on its roof at the height of Typhoon “Odette.” —PHOTO FROM FACEBOOK OF DEPED PHILIPPINES.

Around P393.5 million will be needed to aid in the reconstruction and rehabilitation efforts of damaged school infrastructure due to Typhoon “Odette.”

Based on the latest data of the Department of Education (DepEd), a total of 71 schools incurred damages from the disaster.

In Central Visayas, 52 classrooms were totally damaged, the estimated reconstruction cost of which would amount to P130 million.

The DepEd said the minor damages reported by the schools were not included in the data because the repair funds would come from the schools’ maintenance and other operating expenses.

The DepEd Central Office said it conducted an emergency coordination meeting with the affected regions and divisions to discuss updates and status reports.

The regional offices, meanwhile, are monitoring the schools that were used as evacuation centers.

As of Sunday, 674 schools and 3,935 classrooms were being used as evacuation sites, the education department noted. INQ