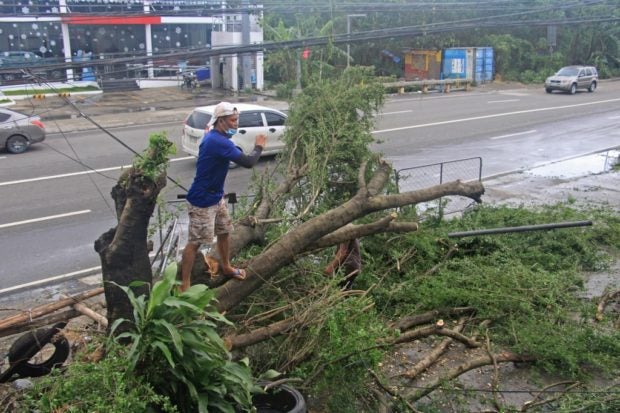 A worker cuts branches of an uprooted tree after Super Typhoon Rai passed in Iloilo on Panay Island on December 17, 2021. (Photo by Tara YAP / AFP)

ILOILO CITY—Thousands of residents on Panay Island were still in evacuation centers, a day after Typhoon Odette left a path of destruction and four persons dead In Iloilo and Guimaras. The island is divided into the four provinces of Aklan, Antique, Capiz and Iloilo.

Electricity has been restored in most of Iloilo City, but several towns in the province remained without power as of Saturday noon.

Joemar Sumiling, 32, of La Carlota City in Negros Occidental, who died after being hit by a tree while clearing a road of tree branches.

Another known fatality, aside from those included in the RDRRMC report, is 58-year-old Antonio Fajurano Jr., a security guard at the Miag-ao, Iloilo, campus of the University of the Philippines Visayas, who was found dead at a guard house after he was hit by a tree.

Reports of damages and casualties were still being awaited, hampered by lack of electricity and mobile phone services in some areas.

The RDRRMC reported that 24,760 families or 93,789 persons were evacuated at the height of the typhoon.

As of 7 a.m. today, Dec. 18, 1,366 families or 4,892 individuals remained in evacuation centers in Iloilo City, according to a report of the Iloilo City Disaster Risk Reduction and Management Office.  /ra