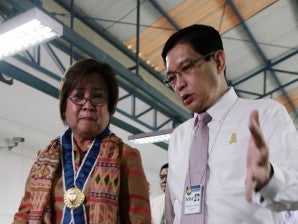 Former National Bureau of Investigation Director Magtanggol Gatdula on Monday filed a petition to prevent Justice Secretary  Leila de Lima and the NBI from framing, or even trying to get him killed, for what he claimed was the fake ambush on NBI Deputy Director Reynaldo Esmeralda last week.

In a 14-page petition submitted Monday, Gatdula asked the Manila Regional Trial Court to issue a writ of amparo ordering De Lima, NBI officer in charge Nonnatus Rojas and Esmeralda to “cease and desist from further threatening [his] life, liberty and security,” and to restrain them from “filing bogus charges of frustrated murder” against him for the ambush of Esmeralda.

Gatdula’s camp said they had received information he would be tagged the mastermind of the ambush by a fake witness who would surface this week.

Gatdula’s camp further feared the accusation would lead to Gatdula being killed in a “rubout.”

“This is an inevitable conclusion because…De Lima and Esmeralda have access to men and means to carry out an extralegal  killing while petitioner stands all alone with no one to help him except this court,” it said.

The Toyota SUV of Esmeralda, NBI deputy director for technical services, was strafed by unidentified gunmen last  Tuesday evening as his two-car convoy was passing through a street in Paco, Manila.

No one was killed, but Esmeralda and his driver sustained superficial wounds while his brother was hit in the shoulder.

The day after the ambush, Esmeralda and De Lima aired theories that the strafing may have been related to the Noriyo Ohara kidnapping case, where Gatdula stands accused. Esmeralda was one of those invited by a Department of Justice fact-finding panel to shed light on the case.

Gatdula’s camp pointed out that the reference to the Ohara case implicitly accused Gatdula of being responsible for the  ambush.