Signal No. 3 up in northern Palawan; Typhoon Odette may exit PH on Saturday

The center of Odette was last spotted over the coastal waters of San Vicente, Palawan, packing maximum sustained winds of 150 kilometers per hour (kph) with gusts of up to 205 kph, according to the latest weather bulletin of Philippine Atmospheric, Geophysical and Astronomical Services Administration (Pagasa).

Pagasa said Odette will pass the vicinity of Kalayaan Islands on Saturday. While over the West Philippine Sea, the typhoon is projected to move west-northwestward and may exit the Philippine area of responsibility by Saturday morning or early afternoon. 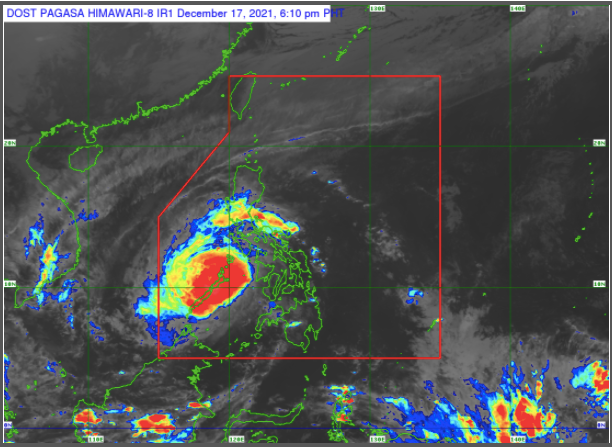 “Destructive typhoon-force winds will be experienced within any of the areas where TCWS No. 3 is in effect. This may bring moderate to heavy damage to structures and vegetation,” Pagasa explained.

On the other hand, the central part of Palawan, namely, Narra, Sofronio Españiola, Quezon, Aborlan, Rizal, Brooke’s Point, as well as Calamian, Cuyo, Cagayancillo Islands, and Kalayaan Islands are under Signal No. 2, where damaging gale to storm-force winds are now prevailing or may be expected within 24 hours.

“Damaging winds reaching gale- to storm-force strength will be experienced within any of the areas where TCWS #2 is in effect. This may result in generally light to moderate damage to structures and vegetation,” said Pagasa.

Meanwhile, the following were areas placed under Signal No. 1, where storing winds may occur within 36 hours:

“Strong winds (strong breeze to near gale) with higher gusts will be experienced within any of the areas where TCWS #1 is currently in effect during the passage of the typhoon. This may generally bring up to very light damage to structures and vegetation,” according to the state weather service.

Pagasa also warned of coastal inundation and gale warning in many seaboards across the country.

The state weather bureau said there is a moderate to high risk of storm surge of up to 3 meters in height in the next 24 hours, which may cause life-threatening flooding in the low-lying coastal areas of Palawan including Calamian, Cuyo, and Cagayancillo Islands.

Moderate to very high seas with 1.2 to 10.0 meters of waves are likewise possible over the seaboards of areas where TCWS is in effect especially in the open sea areas, according to Pagasa.

“These conditions are risky for all types of sea vessels. Mariners are advised to remain in port or take shelter in port until winds and waves subside,” it noted.

A gale warning also remains in effect over several coastal waters that were not under any wind signal, specifically the seaboards of Northern Luzon and the eastern seaboard of the country, Pagasa added.