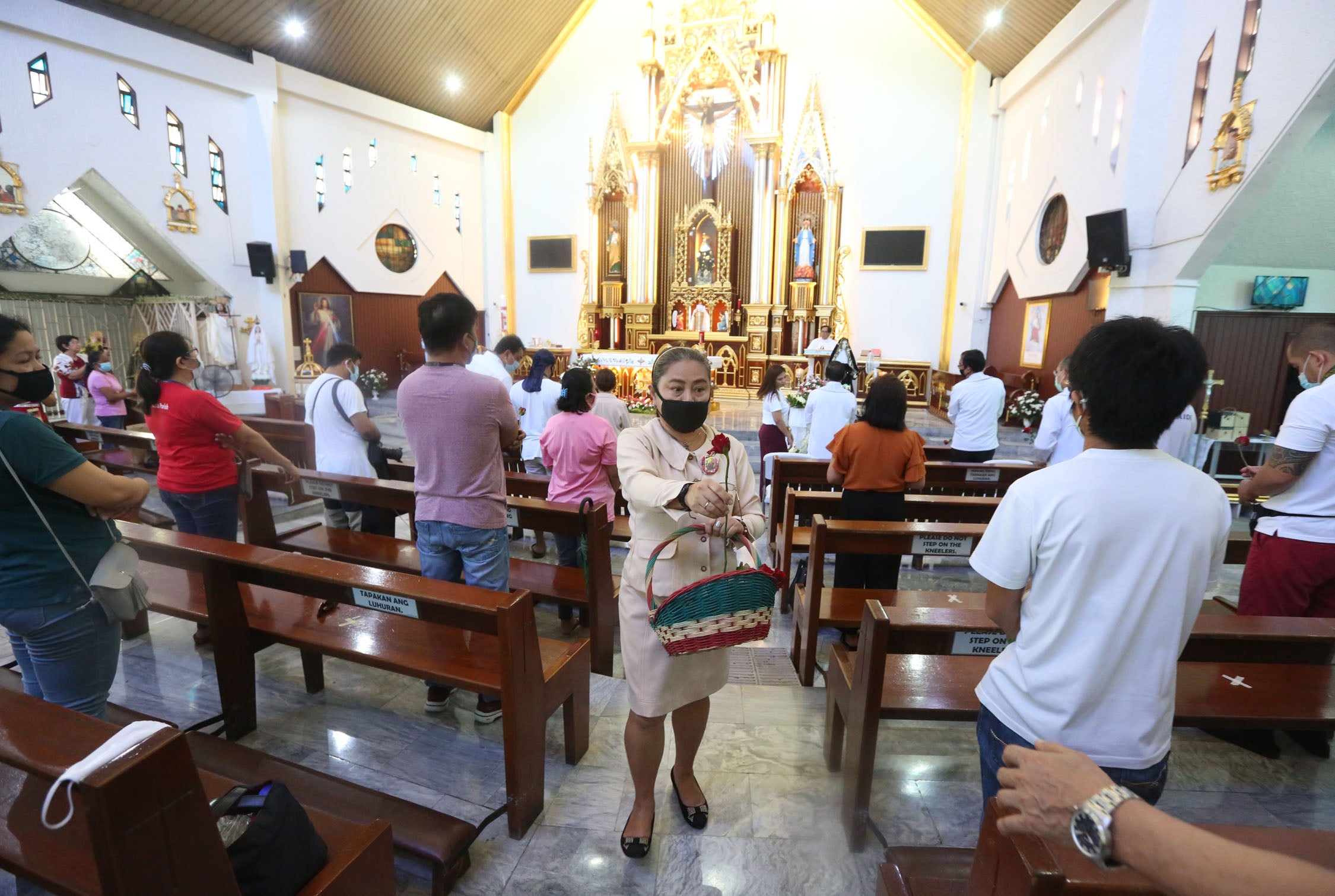 May 17 2020
A church worker hands out roses to parishioners during sunday mass celebrating the feast of Sta. Rita de Cascia in Paranaque City after the local government has allowed church services to resume on sunday as the NCR eases to MECQ status, although strict protocols still have to be followed like social distancing and wearing face masks.
INQUIRER/ MARIANNE BERMUDEZ

MANILA, Philippines—The Catholic tradition of Dawn Masses, or Simbang Gabi, in the Philippines this year is the second during the COVID pandemic but bigger crowds are now turning out in churches as restrictions ease.

The celebration of the tradition last year saw nearly empty churches as COVID restrictions were at their height.

But with or without the crowds filling churches, one thing stayed constant—people cling to their faith believing there’s light in the darkness.

Cee Jay del Rosario, who got sick with COVID-19 this year, was one of them. He told INQUIRER.net that while COVID persists, this period of darkness would come to an end, just like what the first Dawn Mass, celebrated in 1668, signified.

“Simbang Gabi reminds me that I am truly gifted because God has given all signs that there is hope in this pandemic,” said Del Rosario.

“I listened to Him and realized that I needed God more than ever. I want to preserve this hope for the rest of my life, and I also want to be a hope for everyone,” he said.

Del Rosario’s words echoed those of Bishop Pablo Virgilio David, of the Caloocan diocese, who described Simbang Gabi in 2020 as a “gift of hope.”

This year, Fr. Reginald Malicdem, rector of the Manila Cathedral, said through St. Paul’s Sambuhay, that “despite the darkness brought about by the many hardships and pains besetting us, we believe light is awaiting us.” 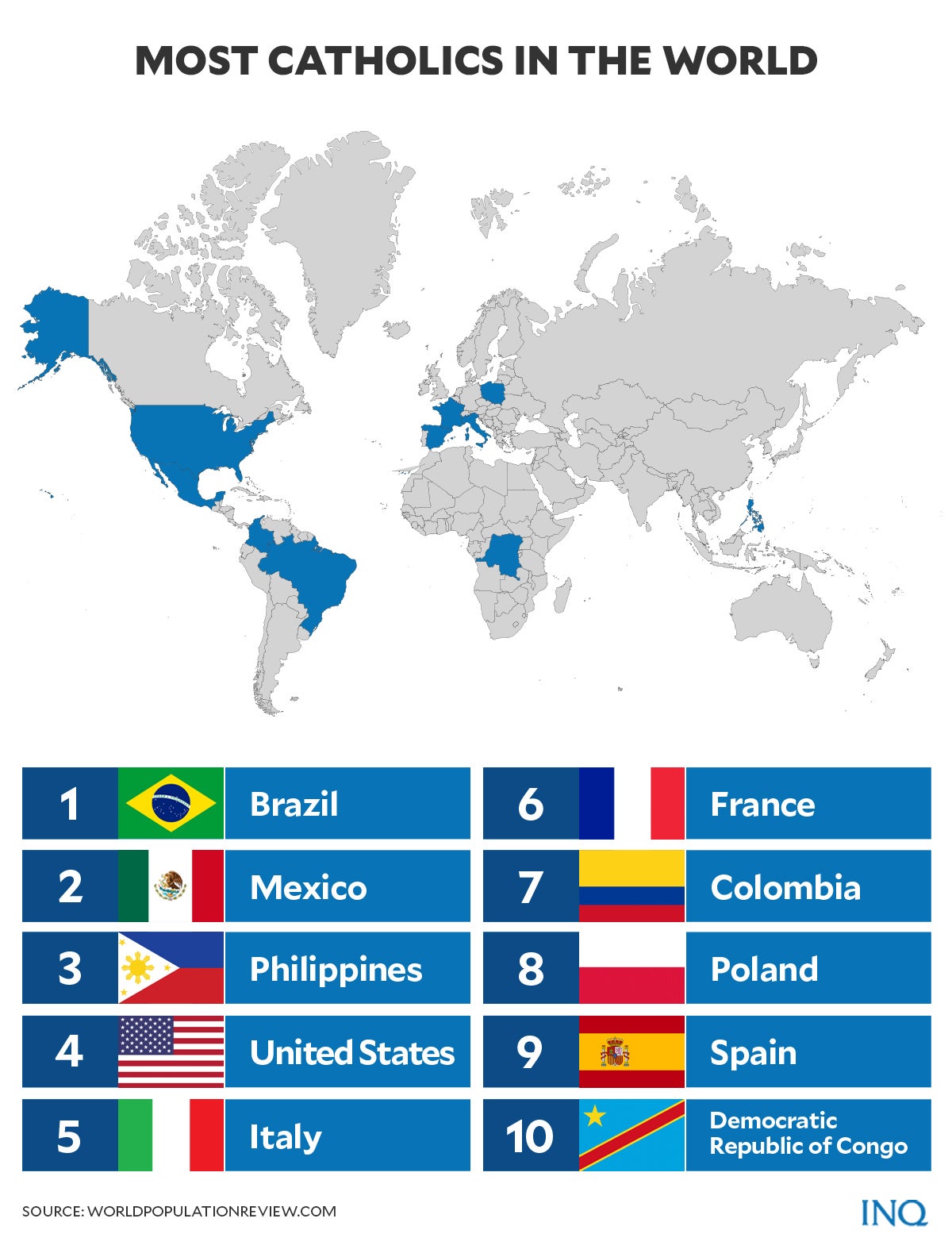 The tradition is celebrated not only in the Philippines but in countries with big populations of Catholics, too. The Philippine celebration of Simbang Gabi, however, becomes more relevant as the country continues to grapple with the pandemic and killings.

Malicdem said while this is the second year that Simbang Gabi and Christmas are celebrated during one of the worst health catastrophes the world has seen, “we celebrate Simbang Gabi in darkness to show that we are a people longing for the light.”

Dawn of a gift

Fr. Andres Rañoa Jr., OFM, said the pre-dawn Masses were conceived as Spanish priests in the Philippines consented to celebrating Mass early to allow farmers to take part in them before setting off to work in the fields.

Described by the Church as a gift, Simbang Gabi at the time signified hope as farmers listened to the Gospel and prayed for a good harvest–similar to the hope that they believe God will make true, “a promise given to people in dire need of salvation.”

Rañoa, however, said the 1668 narrative was only one of the versions surrounding the origin of Simbang Gabi which the National Catholic Register said was a reminder of the complex history of the Catholic religion. 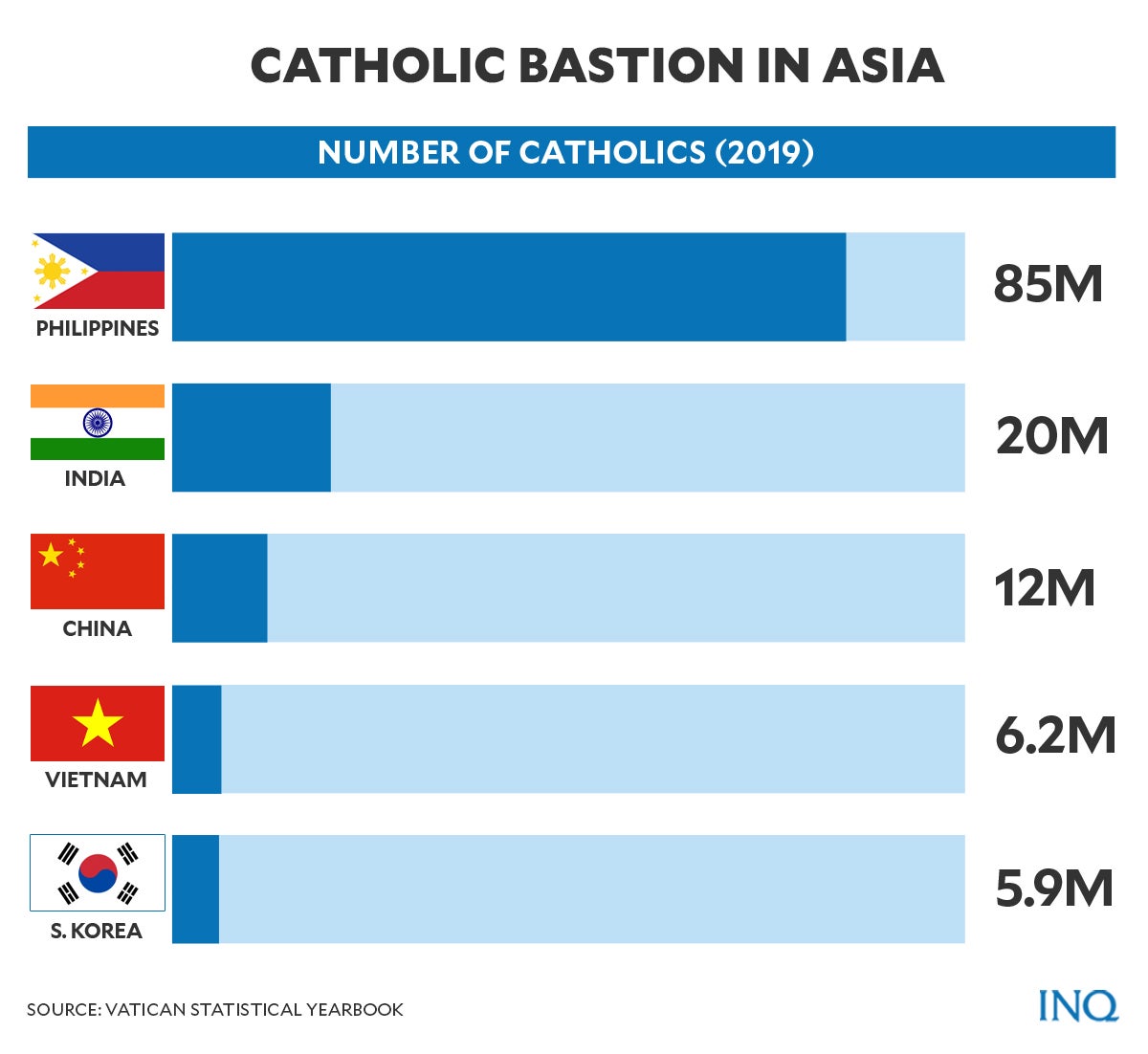 The Philippine Statistics Authority’s 2015 Census of Population said that out of the Philippines’ more than 100 million people in August 2015, at least 79.5 percent or more than 80 million are Roman Catholics. This was higher than more than 74 million in 2010.

Latest figures from the 2019 Annuario Pontificio, released last March, showed that the Philippines already has 85 million Catholics, the biggest in Asia. Behind the Philippines were India (20 million), China (12 million), Vietnam (6.2 million), and South Korea (5.9 million). 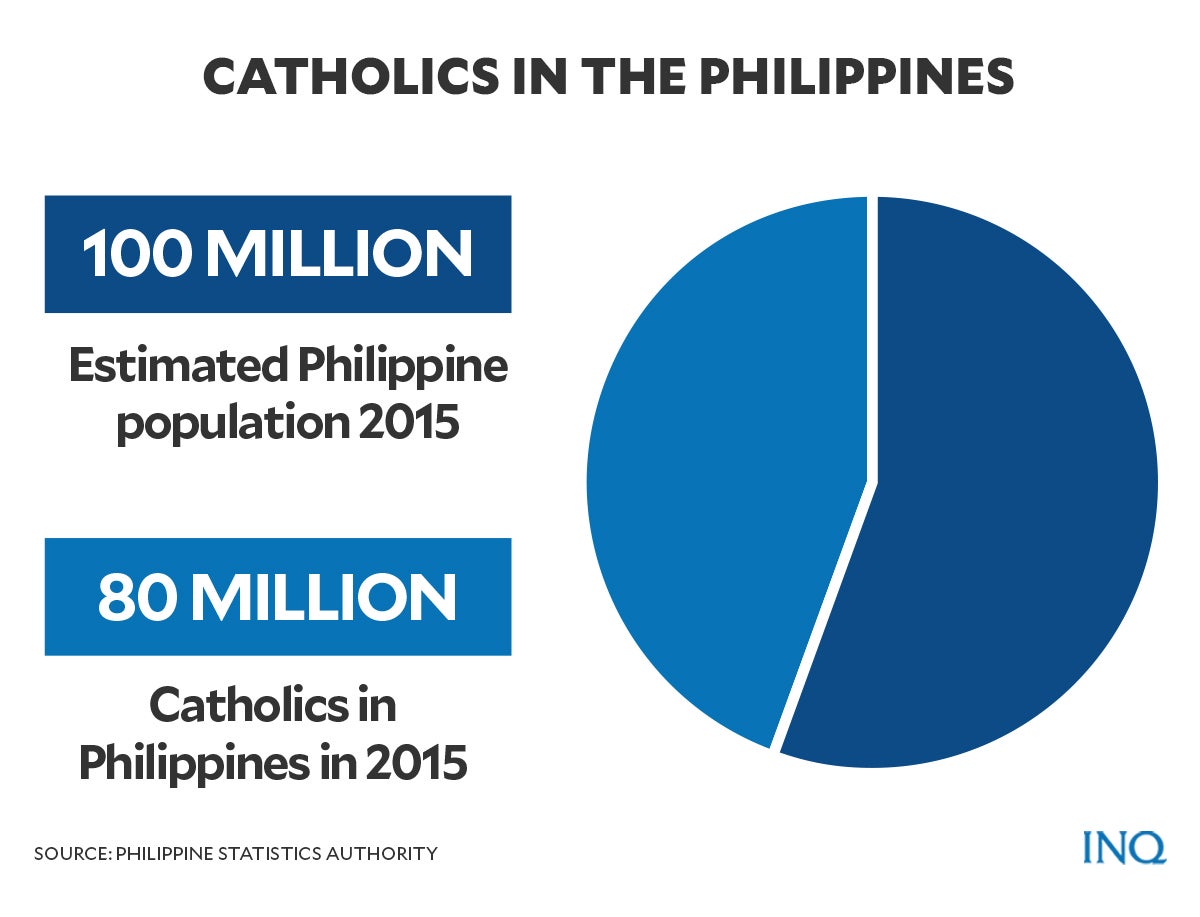 There’s no definitive history about Simbang Gabi but here’s a list of narratives surrounding the origins of the tradition:

In the 1700s, one December dawn, a Spanish priest gathered farmers to say a prayer of thanksgiving to God for their harvest as they were asked to sing for the Mass while the priest shared breakfast with them.

The INQUIRER, in 2015, said the book, “Pasko!: The Philippine Christmas,” that was written by Reynaldo Alejandro and Marla Chorengel, narrated that the farmers heeded the priest since they were already used to early morning sacrifices.

Jesson Allerite, a historical researcher, said since Masses, back then, were forbidden at night, “the Masses were offered in the darkness of dawn amid the blaze of many lighted candles, especially for farmers and workmen who had to labor afterwards.”

Sr. Jolisa Lazaro, S.N.D., told the USCatholic.org that since the Masses were held at dawn, Simbang Gabi was considered a version of Misa de Gallo which means Mass when the roosters crow. She said Church leaders then gathered as many people together to instill the teachings of the Catholic faith while integrating Filipino heritage.

Simbang Gabi was first held in 1587, when Fray Diego de Soria, head of the Convent of San Agustin Acolam, asked the Vatican to allow the order to hold Christmas Masses for farmers who will work early in the fields.

In the 16th century, Pope Sixtus V ordered that dawn Masses should likewise be celebrated in the Philippines every Dec. 16 to Dec. 24 to give farmers a chance to hear Mass before they head to the fields.

Rañoa said the First Plenary Council of the Philippines, in 1953, made a formal petition to the Vatican to continue with Simbang Gabi. The Papal Indult licensed the petition.

Most of the Philippines would be on Alert Level 2 until the end of 2021 which allows the easing of COVID restrictions compared to last year’s.

As COVID continues to paint gloom, the Simbang Gabi tradition marks a significant celebration of heritage especially for 77 percent of Filipinos which a survey by Social Weather Stations said believed religion was “very important.”

In the Global Sisters Report of the National Catholic Reporter, Jennibeth Sabay said Simbang Gabi is a great source of spiritual nourishment to the faithful, which invites them to pray and contemplate, helps them appreciate their faith more fully and meditate on God’s love.

Bishop Broderick Pabillo, of the Apostolic Vicariate of Taytay, said in his invitation to Filipinos to take part in Simbang Gabi: “Let us receive Holy Communion with our hearts filled with hope for our safety amid this crisis.”