‘Odette’ rouses fears of another ‘Sendong’ 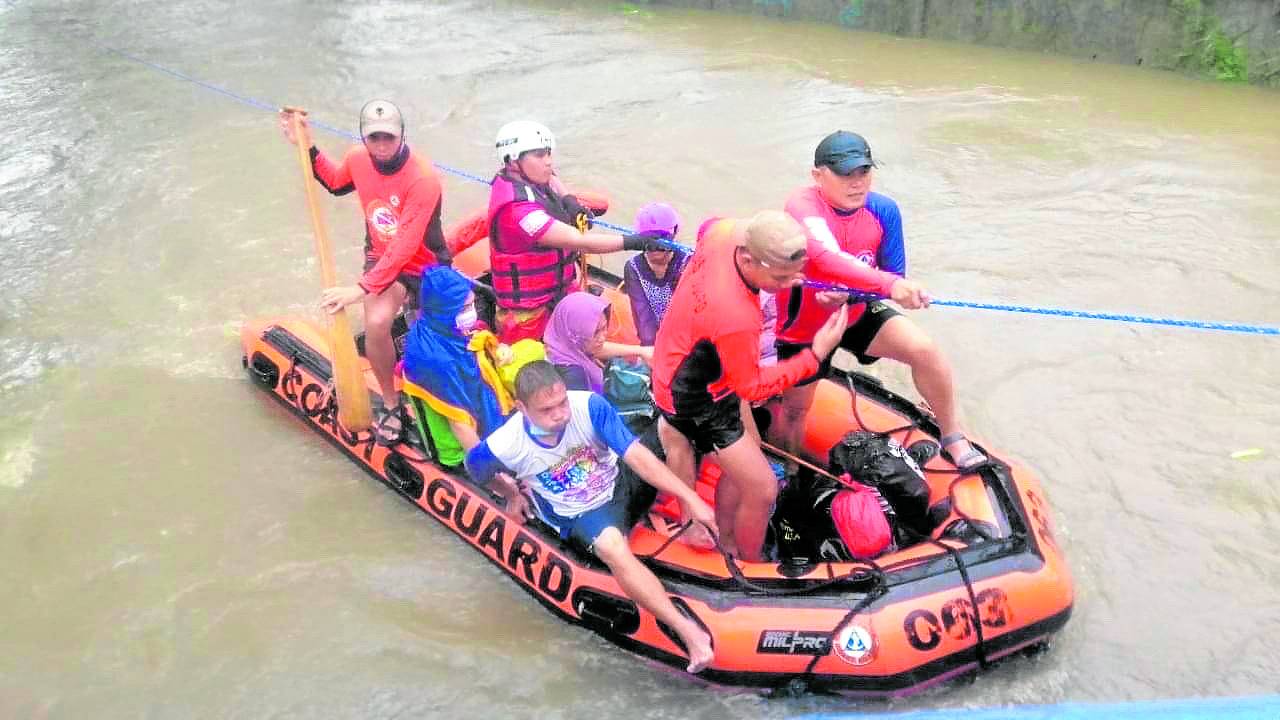 ON SAME BOAT Grabbing hold of a rope to drag their rubber boat to safer ground, rescuers from the Philippine Coast Guard pick up residents trapped in a flooded neighborhood in Cagayan de Oro City, one of the areas that bore the brunt of Typhoon “Odette” (international name: Rai) on Thursday. —REUTERS

There were no immediate reports of damage and casualties from the two islands, which are popular with tourists and surfers.

Before the typhoon struck, Dinagat Islands Gov. Arlene Bag-ao said some 1,000 families were evacuated as a precaution. Early evacuations also were carried out in Siargao.

The strong typhoon aroused fears of a repeat of the disaster exactly 10 years ago to the day when Tropical Storm “Sendong” (international name: Washi) caused massive flooding and mudslides across Cagayan de Oro City and nearby Iligan City, leaving more than 1,400 dead.

The floods then swept houses along waterways all the way to the sea. About 300 people are still missing to this day.

After hitting Siargao and Dinagat with gusts of up to 270 kph, Odette moved west-northwest at 30 kph and made its third landfall at Liloan on Southern Leyte province’s Panaon Island at 3:10 p.m.

By 5:40 p.m. on Thursday, the fast-moving typhoon already made its fourth landfall on Padre Burgos, also in Southern Leyte, according to the Philippine Atmospheric, Geophysical and Astronomical Services Administration.

In other areas, the typhoon’s fierce winds toppled trees and power lines, and blew down houses made of light materials. Its torrential rains caused widespread flooding and landslides, and storm surges that threatened to inundate coastal roads and communities.

To prevent or minimize casualties, disaster management authorities took early precautions, including the evacuation of communities in the path of the typhoon, the 15th to enter the Philippine area of responsibility and the 8th to make landfall in the country this year.

About 100,000 people, or more than 26,000 families, were evacuated ahead of the typhoon in Central Visayas, Eastern Visayas, Northern Mindanao and northeastern Mindanao (Caraga Region), according to the National Disaster Risk Reduction and Management Council.

Officials of Surigao City and Tandag City implemented forced evacuations of its flood- and landslide-prone barangays as early as Wednesday afternoon.

In a live broadcast, Cagayan de Oro information officer Maricel Rivera urged residents in these areas to leave their homes before nightfall as rescue efforts then would become difficult.

According to the Surigao City Information Office, Odette dumped 153.1 mm of rain over a 24-hour period ending at 8 a.m. on Thursday. Based on a 30-year record, that amount of rain was more than a fourth of the city’s normal 585.2 mm of rainfall for the whole month of December.

In Iligan City, Hinaplanon village chief Veronico Echavez said they were urging residents on Bayug Island near the mouth of a large river to evacuate. He said that 200 residents there died in the 2011 disaster.

The winds also downed trees, slowing down traffic on the national highway of Agusan del Norte and Misamis Oriental provinces.

The heavy rains caused landslides in Cagayan de Oro, Gingoog City, and in the towns of Balingasag, Sugbongcogon and Balingoan in Misamis Oriental. A landslide also blocked a highway in Butuan City.

Power was down in Butuan City, a big portion of Agusan del Norte, and Surigao del Sur.

The rains damaged a water pipeline in Butuan City and resulted in neck-deep floods in Bubong and Ditsaan-Ramain towns in Lanao del Sur province.

Most of the local governments in Northern Mindanao and Caraga suspended work and classes.

In Davao City, which experienced downcast skies and moderate rainfall on Thursday, a landslide damaged two houses in Matina Crossing but caused no injuries.

In Davao Oriental province’s Caraga town, cottages were washed out to the sea and moderate winds and waves battered the coastal areas of Boston and Baganga towns.

In Cebu province, whose central part is in the typhoon’s path, thousands of families also were preemptively evacuated on Thursday while work in both government and private offices were suspended by local chief executives.

By early Thursday evening, parts of Cebu already were without power, affecting 94,500 customers.