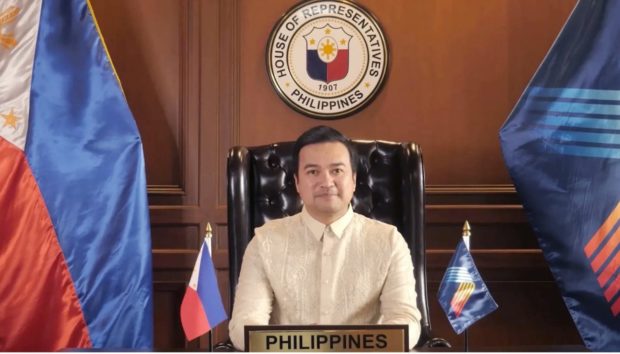 FILE PHOTO: Speaker Lord Allan Velasco speaks before the 42nd General Assembly of the ASEAN Inter-Parliamentary Assembly (AIPA) on Monday, August 23, 2021. Photo from the Office of the Speaker of the House of Representatives

MANILA, Philippines — Speaker Lord Allan Velasco on Thursday declared that the 2021 legislative session ended on a high and hopeful note as the House of Representatives approved the proposed national budget next year.

According to Velasco, the approval of the P5.024-trillion national budget for 2022 on Wednesday is a testament to the House’s effort to come up with a budget that would support the government’s pandemic response for the benefit of the people.

“This budget offers hope, opportunity, and economic security for our kababayans as we tread on the path to recovery in 2022,” Velasco said in his adjournment speech.

“All of us played important roles in this monumental responsibility. And because of the commitment and dedication of every person here today, we are bringing this dark and difficult chapter in our history to a hopeful close,” he added.

As of December 14, the House said it has approved 133 Republic Acts and expects more measures will be enacted into law once President Rodrigo Duterte signs other bills including the proposed 2022 General Appropriations Act.

The House also said it has passed other 930 measures on final reading and has adopted 266 resolutions.

Still, Velasco said the House must be ready for the incoming year which he considers important for the country’s recovery from pandemic-induced problems.

“Let us build on our accomplishments and let us face 2022 with defiant hope. Magkaisa po tayo sa pag-asa, sa pagbangon, at sa pagbubunyi,” he said.

“If there is one thing that the pandemic has shown us, it is that we are stronger than we knew,” Velasco also said. “We are more capable than we realized. We have seen that there is more that unites us than divides us. We have seen that our legislative work is vital to our pandemic response.”

On Wednesday, both the Senate and the House of Representatives ratified the proposed 2022 national budget. It will be transmitted to the Office of the President so Duterte could sign it into law.

Under the Congress-approved budget, P5 billion was allocated for the government’s social amelioration program next year while the cash-based assistance for poor families, or the Pantawid Pamilyang Pilipino Program (4Ps), would get P107.670 billion.

But Bayan Muna Rep. Carlos Zarate still expressed doubts that the approved 2022 national budget plan was made for a strengthened COVID-19 response of the government.

Zarate cited the P17.01 billion budget given to the National Task Force to End Local Communist Armed Conflict (NTF-Elcac) next year. NTF-Elcac is an agency that the Makabayan bloc has criticized as it was being allegedly used as a tool to harass activists and critics. Zarate has said he prefers the budget for NTF-Elcac to instead fund the COVID-19 response or the social cash aid.

There were also other subsidies that were included in the 2022 budget.  However, Zarate stressed again that the country’s expenditures are still geared towards infrastructure programs, as the Department of Public Works and Highways still gets over P700 billion compared to the Department of Social Welfare and Development’s P204 billion.