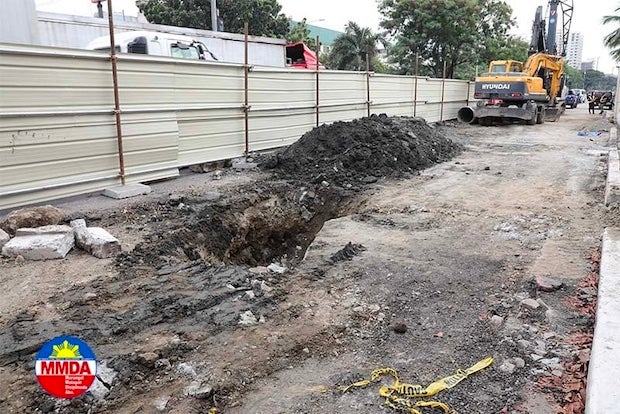 Part of the southbound portion of Roxas Boulevard that will be repaired by the DPWH. (Photo from the Facebook page of the MMDA)

MANILA, Philippines — The southbound portion of Roxas Boulevard will be closed for two to three months to allow the Department of Public Works and Highways (DPWH) to repair a damaged drainage structure in front of the Libertad Pumping Station in Pasay City, the Metropolitan Manila Development Authority (MMDA) announced on Wednesday

The DPWH gave the MMDA three days to set the exact date of the closure to give time to “make a careful study of the impact of the possible road closure and make recommendations on how to divert the vehicles,” MMDA Chairman Benhur Abalos said in a statement.

In the meantime, Abalos said that the DPWH South Manila District Engineering Office had started preliminary repair work at the area to replace the damaged Libertad Drainage main box culvert.

“Heavy vehicles and trucks traversing the major thoroughfare have contributed to the damage of the drainage culvert over time. There is a danger that the drainage structure, constructed in the 1970s, would collapse, so rehabilitation must be done immediately,” Abalos said.

“This early, we are appealing for the public’s understanding for the inconvenience the possible road closure would cause,” he added.

At least 53,000 vehicles, including trucks, pass through the southbound portion of Roxas Boulevard, according to the MMDA.

In Baguio, traffic jams, crowds back