7 regions on high alert due to Typhoon Odette 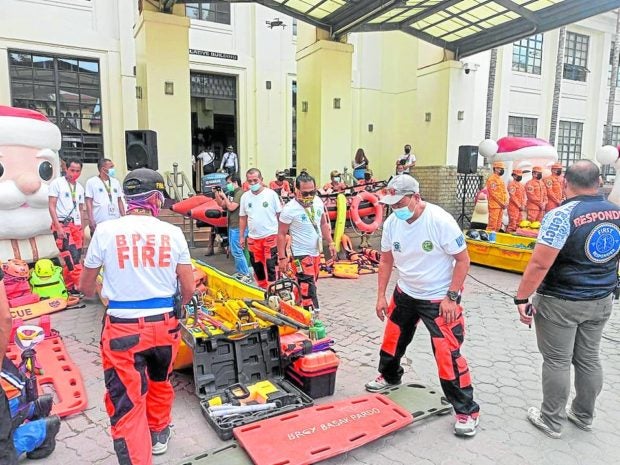 MANILA, Philippines — The National Disaster Risk Reduction and Management Council (NDRRMC) has placed seven regions on the highest level in emergency preparedness and response protocol after Severe Tropical Storm Odette (international name: Rai) intensified into a typhoon as it got closer to the Visayas and Mindanao mainland on Wednesday.

Local governments in these areas, with a combined population of 30 million people, have been advised to conduct preemptive evacuation.

At an online press conference on Wednesday, Undersecretary Ricardo Jalad, the NDRRMC executive director, said the national government had standby resources of around P332 million to cover food and nonfood (hygiene kits, family packs, blankets, face masks) needs of families expected to be affected by the typhoon in the seven regions.

TrackJalad, also the administrator of the Office of Civil Defense, noted that the allocation “will not be enough,” but they could use the remaining NDRRMC fund for this year for additional resources.

Odette reached typhoon category at 8 a.m. Wednesday and as of the 4 p.m. update by the Philippine Atmospheric, Geophysical and Astronomical Services Administration (Pagasa), it had maximum sustained winds of 130 kilometers per hour near the center and with gustiness of up to 160 kph.

The typhoon’s center was 495 km east of Hinatuan, Surigao del Sur, and was moving west northwestward at 25 kph, according to the weather bureau.

Pagasa weather specialist Nikos Peñaranda said the typhoon was “more leaning” toward southern Eastern Samar or in Surigao del Sur, where it could make its first landfall on Thursday afternoon.

Odette will then move toward Central Visayas on Thursday night on its way to Cuyo Islands in Palawan.

Signal No. 2 was hoisted by Pagasa over the eastern portion of Surigao del Norte and Surigao del Sur.

Some provinces in Luzon were also placed under Signal No. 1, among these Sorsogon, Masbate and the southern portion of Romblon.

Pagasa said that the highest tropical cyclone wind signal they could raise may be at Signal No. 3 “due to possible destructive typhoon-force winds in localities near or along the path of this tropical cyclone.” Under Signal No. 3, winds of 121 kph to 171 kph, which could bring moderate to heavy damage, are expected within the next 18 hours.

Jalad said the national and local governments had prepared for Odette as early as Dec. 10.“We have learned many things after the country was hit last year by Rolly (Goni), Quinta (Molave), and Ulysses (Vamco),” he noted, referring to the successive strong typhoons that devastated the country from October to November last year.

“So this time, we prepared early for Odette, especially prepositioning of supplies [for evacuees],” Jalad added.

In the Visayas, local governments have started evacuating people living in coastal and riverside communities as well as in landslide-prone areas.Sea travel was also suspended in the three regions in the Visayas.

In Eastern Visayas, 194 families (1,778 people) were evacuated on Wednesday.

Tacloban City Mayor Alfred Romualdez appealed to families living along coastlines to seek safer ground and not wait for a forced evacuation order.

Work and classes on Wednesday had been suspended in Tacloban and in the provinces of Samar and Southern Leyte.

In Cebu City, a standby fund of P100 million was prepared for those who would be displaced by the typhoon.

Cebu City Mayor Michael Rama said the city government had readied all necessary equipment, including inflatable boats, in case of severe flooding in the city.

In Cebu province, Gov. Gwendolyn Garcia has set up an incident command post in the town of Sibonga where heavy equipment, including rescue vehicles, and relief goods have been readied for deployment.

In Western Visayas, preemptive evacuations have started in Roxas City, Capiz province, with 217 families (706 people) from 10 coastal barangays leaving their homes as early as Tuesday night.

Trips of passenger boats between the mainland of Malay town and Boracay Island in Aklan province would be suspended starting 6 a.m Thursday. In Surigao City, 712 families (2,619 people) from 10 villages were taken to evacuation sites in the city center, according to the local information office.

As of 3 p.m. Wednesday, 3,668 families were evacuated from coastal communities in Tandag City. They are staying in 18 evacuation centers, the city government said.

Work and classes in the cities of Butuan, Tandag and Surigao were suspended by their local governments starting Wednesday.