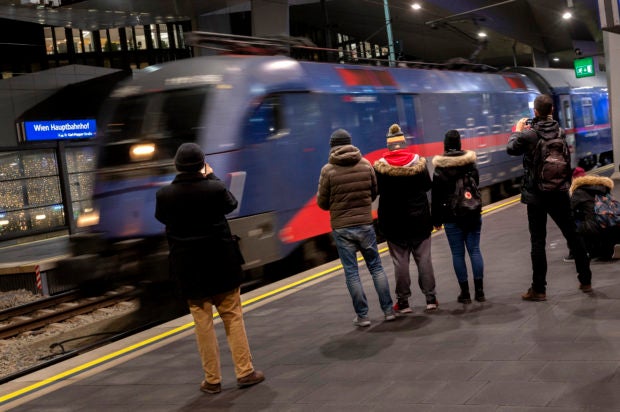 Visitors watch the departure of the first Nightjet Train between Vienna and Paris at the Central Station in Vienna, Austria on December 13, 2021, as part of the expansion of night trains in Europe as a green alternative to flying. AFP

ON BOARD THE VIENNA-PARIS NIGHT TRAIN, Austria — With a resurgence of Covid-19 gripping Europe, there were no paying passengers for the maiden voyage of the reborn night train linking Paris and Vienna.
A return of night trains to the Old Continent is seen as symbolic of the efforts to shift travel from the air back to rail as Europe seeks to meet its climate change commitments.
But as the train following the route of the legendary Orient Express pulled out of Vienna’s train station on Monday evening, it was empty except for a delegation of officials and media.
“There should have been lots of people,” said Ibrahim Wade, an attendant in charge of a sleeping cabin car, holding a list of absent passengers.
“It’s due to the health situation.”
The night trains operated by Austria’s national rail firm OBB under the Nightjet brand offer regular seats, as well as both simple and more comfortable sleeping cabins.
Some of the more luxurious berths even have private showers, while other passengers have to wash at the ends of the train cars.
Towels are provided, as is breakfast, but there is no Wi-Fi and the heating didn’t always work.
“We’re clearly targeting business travellers with the night train,” said Kurt Bauer, chief of long-distance trains at OBB.
The service is also aimed at tourists who like to take their time. Salzburg, the city of Mozart, is along the route. As are Strasbourg and Munich.
“Our clients are more and more sensitive to  environmental aspects. Particularly the young, but not only,” said Jean-Baptiste Guenot, an executive with French rail company SNCF.
It was low-cost airlines which killed off the Orient Express more than a decade ago, and flying remains the main competitor for long-distance train travel.
The train can be price competitive for those who reserve very early, but it really sets itself apart on environmental grounds.
A trip by air emits about 10 times the amount of CO2 as one by rail.
Vienna has become the European capital of night trains since OBB began in 2016 to invest in reviving a segment other train operators were abandoning.
Paris, a top tourist destination, was a clear choice for OBB as there was no direct rail service linking the City of Love and Vienna since the Orient Express stopped serving the two cities in 2007.
Three trains weekly will make the 1,400-kilometer (870-mile) run between the two cities for the moment.
Nightjet plans to launch a Paris-Berlin service next, and at the end of 2023 it hopes to have night trains between Berlin, Brussels, Paris and Vienna link up.
Nightjet is also looking to create a Zurich-Barcelona route that would serve Geneva and Lyon along the way.
The French government would also like to see night trains linking Paris with Barcelona, Copenhagen, Madrid, Rome, and perhaps even Stockholm.
RELATED STORIES
All aboard! Europe’s night trains get back on track
Planes, trains and apartments –DIY Europe
ADVERTISEMENT
FEATURED STORIES
NEWSINFO
Guarding Sara: Why next VP is getting own security team
NEWSINFO
Palace fires CHEd official, 3 others
NEWSINFO
Putin to make first foreign trip since launching Ukraine war