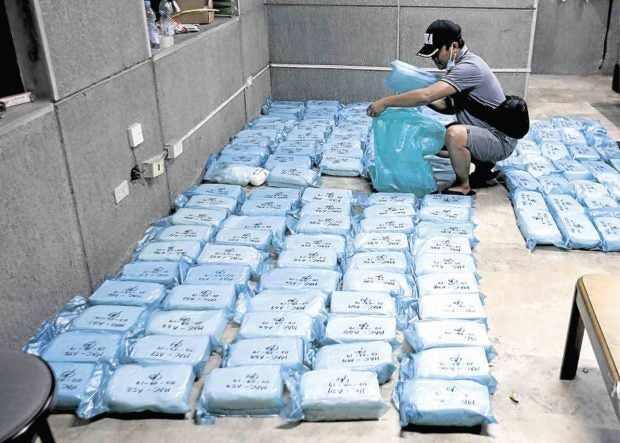 MANILA, Philippines — President Rodrigo Duterte asked Interior Secretary Eduardo Año on Monday to prepare a drug war report centering on how much illegal drugs — particularly crystal meth (locally known as shabu) — had been seized so far so that the International Criminal Court (ICC) would see the gravity of the problem.

“Can we have a compilation of all shabu seized during these years, starting maybe, during my term, on how many tons of shabu has been embargoed by the government?” the president said, speaking in a mix of Filipino and English.

“Just for our — well it’s intended to apprise the human rights [advocates]. And maybe when the time comes, we will use it to show to the ICC —  as that’s the reason why I am not going to bow down to their jurisdiction. [It’s] because they will see the enormity of the problem of shabu in the country,” he added.

In response, Año said that he would present another report for the next meeting. In the meantime, he said the government had already seized P79 billion to P80 billion worth of shabu since Duterte took office in 2016.

“I will make a detailed report for our next meeting, Mr. President,” Año said in Filipino.

“Just so that they will know,” Duterte said.

According to the recent Real Numbers on the drug war released by the Philippine Drug Enforcement Agency (PDEA), shabu remains as the top drug confiscated in anti-drug operations, with 7,330 kilograms seized from 2016 up to October 2021.

Based on the estimate of the Dangerous Drugs Board (DDB) that a kilogram of shabu costs P6.8 million, the total value of the seized shabu would be P49.9 billion — lower than Año’s estimate, but still a big amount.

The drug has been a hallmark of the Duterte administration, as he promised during the campaign period for the 2016  elections to rid the country of the drug menace.

The administration has been using the big amount of drugs and the number of persons arrested to measure the campaign’s effectiveness. But critics insist that it has been a bloody campaign with a seeming disregard for human rights.

As of October, 6,215 individuals have been killed in legitimate anti-drug operations, but groups claim that the number could be well between 12,000 to 30,000.

Duterte is facing several complaints before the ICC, including those filed by staunch administration critic former Sen. Antonio Trillanes IV, late lawyer Jude Sabio, and drug war victims belonging to the Rise Up for Life and Rights.

According to the petitioners, Duterte violated Article 7 of the Rome Statute for widespread and systematic attacks that resulted in the murder of thousands of civilians.

Then in September, the ICC’s Pre-Trial Chamber announced that it had approved Bensouda’s request for judicial authority to proceed with a probe on Duterte.